The rescued persons were all natives of an economically backward area in Assam's Chirang district. 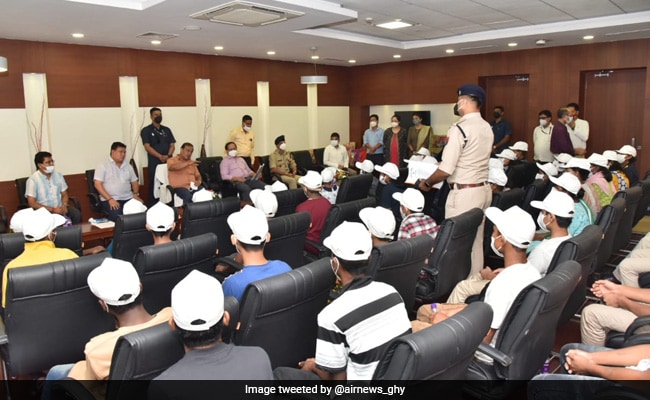 Forty-two trafficked persons were rescued from Sikkim last month by the Assam police.

Thirteen more children and women from Assam, illegally engaged in domestic work in Sikkim, were rescued by the police today. Two weeks ago, 42 such persons were freed from similar conditions.

These natives of Assam were trafficked to the neighbouring hill state by a racket operated by one Krishna Yogi who has been arrested. They were lured with better-paying employment opportunities.

"During our interrogation of Krishna Yogi, he told us about 13 more children still serving in various households. Based on his inputs we searched the houses and rescued them," said Laba Kumar Deka, the Chirang district Deputy Superintendent of Assam police, who led the rescuing team.

Among those rescued, seven were women and the rest male.

All the 55 youths (42 rescued on July 23 and 13 today) were found in the Sikkim capital Gangtok and areas along the state's border with West Bengal border -- Sintam and Ranipool in East Sikkim and Namchi in South Sikkim.

They are all natives of an economically backward area in Chirang district of western Assam's Bodoland Territorial Region along the Indo-Bhutan border.

"The accused Yogi took advantage of the economic condition of the family members in those areas and trafficked them, promising good money to the family," Mr Deka said.

This is the second instance in which racketeers have targeted Assam's economically backward sections, the worst-hit by lockdowns and other restrictions caused by the COVID-19 pandemic since March 2020.

Several cases of human organ trafficking from various parts of the state had popped up in police investigation last month. People had fallen victim to a gang that carried out illegal kidney transplants in West Bengal but didn't pay the donors the promised amounts fully following the operations.

"The human trafficking of these youths had also started after the onset of the COVID-19 pandemic," Mr Deka told journalists in Sikkim.

Assam Chief Minister Himanta Biswa Sarma had earlier said the rescued children, on a case-by-case basis, will first be handed over to the Child Welfare Committee that will decide if they must be sent to institutional custody, shelter homes, or back to their parents.