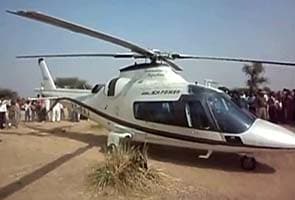 Jaipur: Rajasthan Chief Minister Ashok Gehlot today escaped unhurt when the helicopter carrying him made an emergency landing in Churu district after one of its rotor blades got damaged.

The pilot told PTI that he had to make an emergency landing at Chandkoti village, about 250 km from capital Jaipur, due to vertical vibrations caused by the damaged blade.

The twin-engined Italian-made Agusta 190-E helicopter was flying to Nangalbadi village, 60 km from Chandkoti, where Mr Gehlot was slated to attend two functions when the trouble arose.

"As there were vibrations, the pilot soon realised that one of the rotor blades is not functioning smoothly and decided to make an emergency landing in a field at Chandpur, about 10 km from Pilani," A Chief Minister's office spokesperson said.

The Chief Minister later proceeded for the programmes by road, the SP said.

A technical team would be visiting the scene to examine the chopper which was purchased during Vasundhara Raje's regime, officials said.

Pilot Rakesh Sharma told PTI that an engineer had reached the scene to examine the chopper.

Speaking at the function in Churu, Mr Gehlot said this was the second time when his chopper had to make an emergency landing in the same region.

Promoted
Listen to the latest songs, only on JioSaavn.com
During his previous tenure as Chief Minister, he said his chopper had made an emergency landing in Jhunjhunu district near Churu in 1999.