As BJP, Congress Move MLAs To Hotels, How Madhya Pradesh Numbers Stack Up

The BJP has already moved 102 of its MLAs to a five-star hotel in Gurgaon. As the Congress and the BJP step up efforts to guard their flock amid political crisis brewing in Madhya Pradesh, 94 MLAs - backing the Kamal Nath government - were flown to Jaipur this afternoon.

"We are going to Jaipur with our MLAs. We will stay there together," state minister Sajjan Singh Verma told reporters after the Congress MLAs reached the airport.

The BJP has already moved 102 MLAs supporting the party to a five-star hotel in Gurgaon.

The scrambling for safe-keeping of MLAs comes after the Kamal Nath government plunged into crisis as former union minister Jyotiraditya Scindia ended his nearly two-decade long association with the Congress on Tuesday. Resignation of 21 Congress MLAs in Madhya Pradesh followed his exit, soon after a meeting with Prime Minister Narendra Modi and Union Home Minister Amit Shah. He joined the BJP today in Delhi.

If the resignations are accepted, Kamal Nath government, with a wafer-thin majority of 120 MLAs, will lose power in the state. This will make it easier for the BJP - with 107 MLAs - to stake claim to power as the majority mark in the 230-member assembly comes down to 104.

However, the Congress is confident of winning the floor test if a possibility arises. "We are confident that Congress MLAs will all stick together. At any moment of time, if we are asked to prove majority, we will do that," Jaivardhan Singh, former Madhya Pradesh Chief Minister Digvijay Singh's son, told NDTV. 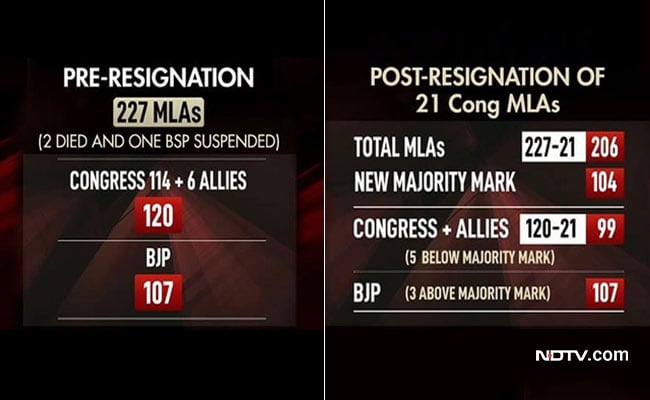 "Scindia ji was one of the tallest leaders in Congress, was in the party for 18 years. He was a minister several times. The kind of following, praise he got in the Congress.... I was shocked when I heard he is leaving the party. But what's done is done... we have to move on," he added.

Last week, Digvijaya Singh, his son Jaivardhan Singh and another Congress leader, Jitu Patwari, were part of a late-night rescue operation at a Gurgaon hotel where several Congress legislators were taken amid attempts to topple the state government.

The party has also claimed that 19 MLAs - Jyotiraditya Scindia loyalists who were taken to Bengaluru in BJP-ruled Karnataka on Monday - should come back.

Here's how the numbers stack up if the Congress MLAs exit from the Madhya Pradesh government.

Majority mark comes down to 104