Read inOther Languages
This Article is From Aug 30, 2018

The ministry said way back in 2012, the Manmohan Singh government had identified organisations and had asked states to initiate action against them. 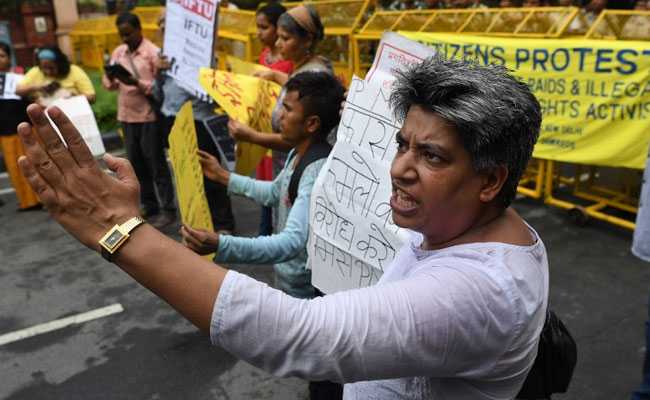 Five activists were arrested on Tuesday in multi-city raid triggering protests in many parts of country.

As many as 128 organisations suspected to have links with Maoists were identified by the previous Congress-led UPA government and some of those arrested on Tuesday were part of these, the government said on Wednesday. Amid outrage and criticism of the raids and arrests targeting rights activists, the Ministry of Home Affairs, the nodal ministry which deals with left wing extremism, came out with a detailed justification.

The ministry said way back in December 2012, the Manmohan Singh government had identified organisations believed to be fronts for left wing extremism and had asked states to act against them.

Mr Ferreira and Mr Gonsalves were arrested in 2007 too and they had spent several years in prison, the home ministry said. Similarly, Varavara Rao has been arrested several times by the Andhra Pradesh and Telangana police in the past.

"The current case involves the links of these individuals with the CPI (Maoist), a banned organisation operating with the devious objective of overthrowing democratic order, and the support provided by them to the CPI (Maoist)," said an officer dealing with the left wing extremism desk.

"Such individuals cannot escape responsibility for aiding and abetting the violent acts committed by CPI (Maoist)'s underground cadres," he added.

According to the home ministry, the CPI (Maoist), to achieve its ultimate objective of seizing political power through a drawn-out "people's war", attaches immense importance to the urban movement.

"The urban movement is the main source for providing leadership and resources to the CPI (Maoist). The responsibility for provision of supplies, technologies, expertise, information and other logistic support is also shouldered by the overground activists in urban centres," the officer said.

The ministry said since 2001, altogether 6,956 civilians and 2,517 security personnel have been killed by the CPI (Maoist).

Naxal violence has also caused massive damage to infrastructure and virtually stalled development activities in some parts of the country.

As for those arrested on Tuesday -- Varavara Rao heads the Revolutionary Democratic Front, Sudha Bharadwaj is a member of the Indian Association of People's Lawyers, Gautam Navlakha is part of the People's Union for Democratic Rights, and Vernon Gonsalves and Arun Ferreira are both in the Maharashtra state committee of the CPI-Maoist.

"These people forged alliances with other organisations, which have nothing to do with leftist ideology," said another senior officer, explaining that different states adopt different strategies to tackle left-wing extremism.

The activists have rubbished the government's allegations.

"On the basis of false statements, a case was filed against me," said Varavara Rao, hours after the Supreme Court ruled that he and the other arrested activists would be in house arrest and not in police custody until its next hearing on September 6. "I have faith in the law," he added.

Vernon Gonsalves said he was being framed with fabricated letters to save those who were really responsible for the January 1 clashes between Dalits and upper caste Marathas at an annual event.