Officials said a cache of weapons had been buried under the soil and and the dog, Jaari led security forces all the way to the spot by sniffing ground 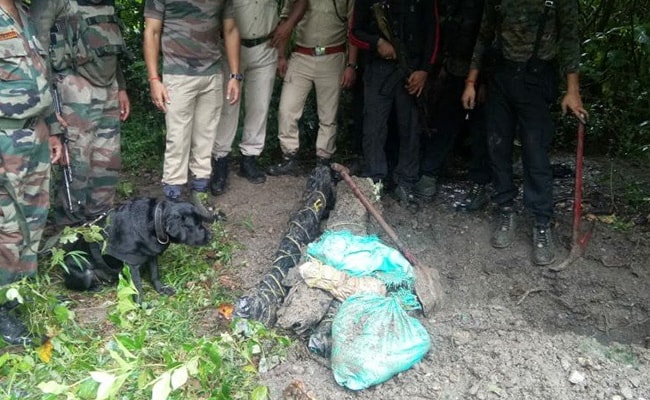 Jaari was inducted into active service in the year 2018 and has been in service for less than 1.5 years

A possible terror attack in Assam has been staved off by a tracker dog of the Indian Army who helped security forces this week in discovering a huge cache of arms and ammunition from a jungle.

The dog, a three-year-old female black Labrador named Jaari, led forces to the exact location deep within the Panbari Forest Reserve in Assam where terrorists had hidden a stock of explosives and weapons. Officials said the cache of weapons had been buried under the soil and Jaari led security forces all the way to the spot by sniffing the ground.

Sources said the guns, explosives and ammunition recovered from the jungle belonged to a faction of the National Democratic Front of Bodoland (NDFB) that has been declared as a terrorist organisation by the government.

The NDFB is an insurgent group in Assam in the Northeast region of the country for the past several years to secure a separate homeland for people belonging to the Bodo ethnicity.

"It is not easy to locate arms stashed under the soil in a huge span of jungle area. Jaari led her handler Bitu Patro and the security forces conducting the operation to the exact location," the Army officer told IANS.

The operation was jointly conducted on September 24 by a unit of the Indian Army in Chirang along with the Assam police and forces of Sashastra Seema Bal.

As per defence intelligence sources, the Bodoland Territorial Council is planning to hold its elections early next year. The cache of arms and explosives - which were seized by Assam police after the recovery - might have been stashed by Bodo terrorists possibly for a terror attack planned before the elections next year, said sources.

"Jaari has been successful on many occasions during training as well as trials. This is her most important operation so far where she has come out with flying colours. It was an outstanding performance in casting of scent without any clue along with super understanding and co-ordination with her handler," said the officer.

"Jaari has been trained as a tracker dog to trail a scent. She has been trained using a methodology of real-time intelligence between her and her handler. She is used as the last tool in hand in the face of a disaster. Very few dogs can perform like this," the officer said.

Jaari was inducted into active service in the year 2018. She has been in service for less than 1.5 years. She has undergone training for six months at Noble 19, a dog training unit of the Indian Army, under overall instructions of unit officer-command Lieutenant Colonel Vivek Mishra.

Jaari's handler Bitu Patro is a Lance Daffadar in the Indian Army. She is based at an "undisclosed" location under the Red Horn division - or the 21st Mountain Division - of the Indian Army that is headquartered in Rangia in Kamrup district of Assam.

(Except for the headline, this story has not been edited by NDTV staff and is published from a syndicated feed.)
Comments
Army Dogpossible terror strikeweapons