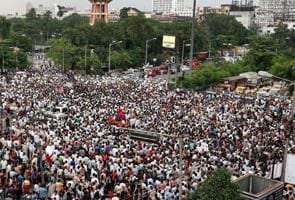 Kolkata: For the first time in six years, thousands of ordinary people spilled on to the streets of Kolkata to protest the spiralling violence against women in West Bengal, particularly a spate of rapes and murders this month.

Some are putting the turnout at 5000, other 10,000, yet others 15,000. But leaving numbers aside, it was an impressive turnout that marched from College Square to the heart of the city, Dharmtala.

Many prominent faces that were expected did not show up. But again, many did. Poet Shankho Ghosh, economists Ashok Mitra and Amiya Bagchi, actors Paran Bandopadhyay and Sabyasachi Chakraborty, filmmakers Tarun Majumdar and Suman Mukhopadhyay. Filmmaker Mrinal Sen sent a letter of support and actor Soumitra Chatterjee also voiced his support and apology that he could attend.

Six year ago, the city's intellectuals and ordinary people had taken to the streets to protest the violence in Nandigram. Friday's march was almost deja vu. Only, last time the protestors were voicing their anger at the CPM government. This time the target of their wrath was the Trinamool government.

"This cannot go on, this unending violence against women and the general sense of insecurity that has gripped the state," said economist Amiya Bagchi. Actor Sabyasachi Chakraboty added "The government must act and seen to be taking action against the perpetrators of the crimes against women."

Among those who marched was a young boy with a clean-shaven head, clearly in mourning. He was the brother of a class six student who was raped and murdered at Gede earlier this month.

Also present were villagers from Kamduni, where a 20-year-old college girl was brutally raped and murdered on June 7. One of the villagers, Bhaskar Mondal, said, "We only want one thing: the death sentence for the people who raped and killed our village girl."

Chief minister Mamata Banerjee had visited Kamduni on Monday but only spoken to the family of the victim. When village women demanded to speak to her of their problems, Ms Banerjee lost her temper and asked them to shut up. She also labelled the protesting women as CPM supporters.

"We are very shocked by the chief minister's anger and reaction. But we don't want to do any politics. We only want justice," said another villager from Kamduni.

Promoted
Listen to the latest songs, only on JioSaavn.com
But there was no getting away for the politics surrounding the rally. Though an appeal had been issued to rise above political colour and join Friday's march, many intellectuals associated with the Trinamool were conspicuous by their absence. Many prominent faces viewed as pro-Left were present.

That didn't make a difference to Surajit Bose who had come to attend the march all the way from Chandrakona in West Midnapore district. "We are not here to change the government," he said. "We only want the government to govern."