Angela Merkel On Two-Day Visit To India From Thursday, To Meet PM Modi

Elaborating on Angela Merkel's two-day visit to India, Walter J Lindner said the German Chancellor would be landing in Delhi on Thursday evening and would be accompanied by a delegation from 12 ministries. 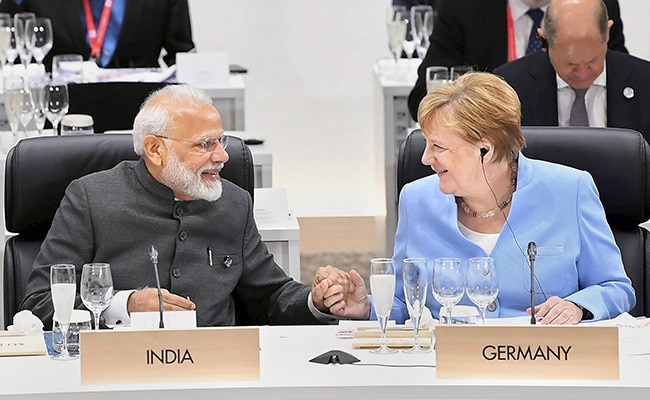 Angela Merkel is on a two-day visit to India and would be landing in Delhi on Thursday evening.

Sources said India and Germany are expected to sign about 20 agreements in a wide spectrum of areas during Angela Merkel's visit.

India and Germany have a "very longstanding relationship" and there is a huge potential for further building cooperation between the two countries in various areas, Walter J Lindner said on Wednesday.

On a question if Kashmir issue will be discussed between Angela Merkel and Prime Minister Narendra Modi, Walter J Lindner said the two leaders have a "very good relationship and they can talk about any issue".

On the visit of European Union MPs to Kashmir, Walter J Lindner said, "EU has already said it is a private visit and that is our stand too. We didn't have any idea that they are coming to India and I know as much as you do".

Elaborating on Angela Merkel's two-day visit to India, Walter J Lindner said the German Chancellor would be landing in Delhi on Thursday evening and would be accompanied by a delegation from 12 ministries.

He said representatives from the ministries are expected to hold bilateral meetings with their Indian counterparts.

"The topics of discussions would include artificial intelligence, sustainable development, urban mobility, agriculture and football among others," he told reporters.

Angela Merkel will also be interacting with Indian female personalities who made an impact in the society, Walter J Lindner said.

"The female personalities would include lawyers, bloggers and start up owners," he said.

Apart from holding bilateral talks with Indian leaders, Angela Merkel would also be visiting a German company in Gurgaon and a Metro station before leaving for airport on Saturday, Walter J Lindner
said.