Santosh Yadav has been a mountaineer who created a world record by becoming the first woman in the world to scale Mount Everest twice. 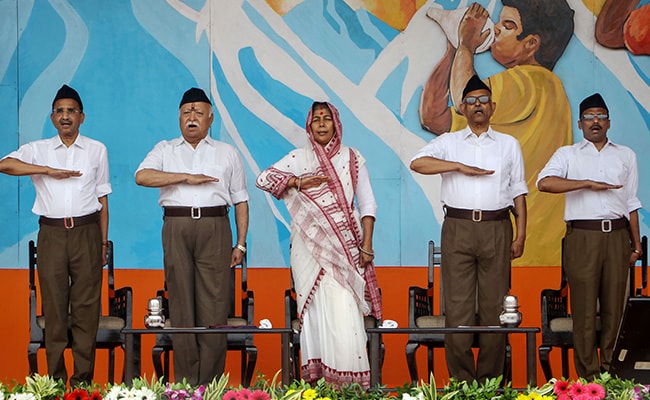 Mohan Bhagwat called for a "comprehensive policy on population"

Marking a change in its tradition, the Rashtriya Swayamsevak Sangh invited a woman for the first time in its history in the form of mountaineer Santosh Yadav as the chief guest at the annual RSS Vijayadashmi festival on Wednesday.

The festival was inaugurated by RSS chief Mohan Bhagwat who also performed the 'weapon worship' (shastra puja) on the occasion.

Santosh Yadav has been a mountaineer who created a world record by becoming the first woman in the world to scale Mount Everest twice.

Addressing the occasion, Mr Bhagwat called for a "comprehensive policy on population" and said that it should be applied equally to all.

"It is true that the higher the population, the greater the burden. If the population is used properly, it becomes a resource. We also have to consider how many people our country can feed and support after 50 years. Population imbalance leads to changes in geographical boundaries... Population control and religion-based population balance is an important subject that can no longer be ignored...So a comprehensive population policy should be brought and should be equally applicable to all. Only then rules pertaining to population control will yield results," he said.

"Considering a woman as the mother is good, but restricting them to closed doors is not good. There is a need to give equal rights to women to take decisions everywhere. All the work that the mother power can do that man cannot do, they have so much power. And therefore it is important to enlighten, and empower them and give them the freedom to work and give equal participation in the work in this way," he said.

"Power is the foundation of peace. The presence of a woman chief guest has been discussed a long time," the RSS chief added.

Mr Bhagwat said that the government's policies are leading the country towards self-reliance.

"The government is pursuing policies which lead towards self-reliance. Bharat's importance and stature has increased in the community of nations. In the sphere of security, we are becoming more and more become self-sufficient. Our economy is getting back to the pre-pandemic levels, which is expected to rise further. The sportspersons are also bringing laurels to the country," he said.

Talking about the importance of mother tongue in education, Mr Bhagwat said that English as a language is "not necessary for a career".

"English is not necessary for a career. A career is built from different things. The government is paying attention to this by way of the New Education Policy (NEP). But do parents want their children to be taught in their mother tongue? Or chasing so-called financial gain or career, do they want their wards to become a part of a blind rat race? When expecting the government to institute the promotion of mother tongue, we should also consider whether we sign our names in our mother tongue or not," he said.

Noting that the availability of government jobs is limited, Mr Bhagwat said that most people have to do their own jobs.

"Rozgar means job and will people run after the job and that too sarkari (government jobs). If all such people run, how many of them could be given a job? In any society, there are a maximum of 10, 20, or 30 per cent jobs in government and private together. Everyone else has to do their own job," he said.

The Vijayadashmi programme is considered to be of great significance for RSS, as the Sangh was founded by Keshav Baliram Hedgewar on this very day back in 1925.

Last year, the Vijayadashmi programme of RSS was done in restricted numbers only, due to the COVID restrictions.

Earlier, President Droupadi Murmu greeted citizens on the eve of Dussehra and extended her warm greetings and best wishes to all fellow citizens.

President Murmu in her message on the eve of Dussehra said, "On the auspicious occasion of Vijayadashami, I extend my warm greetings and best wishes to all my fellow citizens".

President Murmu said that the festival of Vijayadashami is celebrated all over India as a symbol of victory of good over evil, truth over untruth, and morality over immorality. In North India, it is celebrated as 'Dussehra' and the victory of Lord Rama over Ravana is animated through 'Ravana Dahan'. Lord Ram's message of ideal conduct and propriety has been inspiring to people from generation to generation.

"In eastern India, the 'Durga idol immersion' ceremony is celebrated with enthusiasm on this day. Thus, this festival is an example of the cultural unity of India, I wish that this festival continues to inspire us to imbibe the eternal life values of ethics, truth and goodness and to live a life of peace and harmony," she added.