The Union Home Minister said that the Narendra Modi government's decision to scrap Jammu and Kashmir's special status has paved the way for its development. 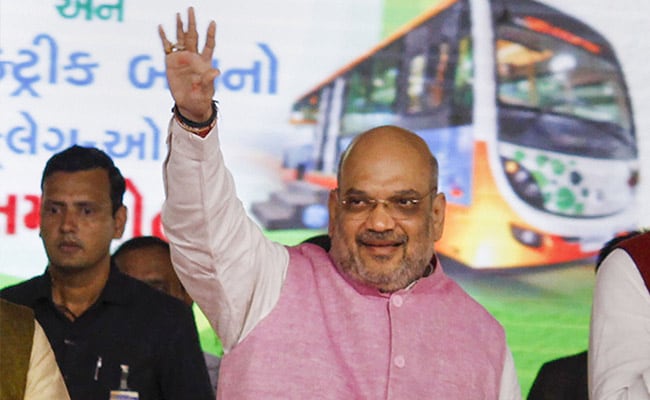 Days after Congress leader Rahul Gandhi was controversially quoted by Pakistan in a petition to the United Nations, Union Home Minister Amit Shah today raised the issue at a public meeting in Dadra and Nagar Haveli's Silvassa.

Amit Shah -- who is also the BJP president -- said that while the entire country supports the centre's move to scrap Jammu and Kashmir's special status under Article 370 and bifurcate it into two union territories, it is still being opposed by certain political parties.

"The Congress opposed the move to remove Article 370, and whatever statements Rahul Gandhi makes are cheered in Pakistan. Pakistan has included his comments in its plea to the United Nations. Congress leaders should be ashamed that their statements are being used against India," he said.

In her letter to the United Nations, Pakistani Minister Shireen Mazari had referred to certain comments made by Rahul Gandhi after the centre thwarted his attempt to visit Jammu and Kashmir last week. "It is clear that things are not normal in Jammu and Kashmir," the Congress leader had said, adding that there were reports of violence and people dying in the region.

The Congress, in defence of its former chief, accused Pakistan of "mischievously dragging Rahul Gandhi to justify its pack of lies and deliberate misinformation".

The party leader also tweeted a clarification the following day: "I disagree with this government on many issues. But, let me make this absolutely clear: Kashmir is India's internal issue and there is no room for Pakistan or any other foreign country to interfere in it."

Rahul Gandhi also claimed that his statement referred to violence "instigated and supported by Pakistan".

Rahul Gandhi was not the only Indian politician mentioned by Shireen Mazari in her letter to the United Nations. Under a section, "Gender-based violence as a weapon of war", it quoted Haryana Chief Minister Manohar Lal Khattar as saying: "Muslim party workers should rejoice in the new provisions. They can now marry white-skinned women from Kashmir".

The centre, however, trashed Pakistan's letter by claiming that it's "not worth the paper it is written on".