Mamata Banerjee Versus BJP Plays Out In Bengal Doctors’ Strike

Senior BJP leader Mukul Roy has alleged that members of a particular community had carried out the attack on doctors and that the perpetrators belonged to the Trinamool Congress. 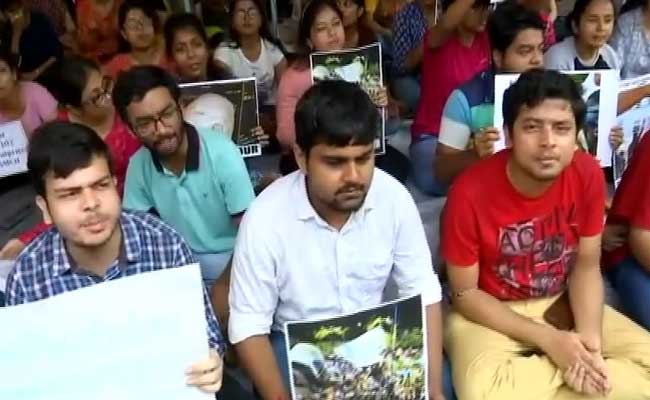 The furore over junior doctors' strike in Bengal following violence at a government hospital has taken a political turn, with Chief Minister Mamata Banerjee alleging that it is the result of a conspiracy between the BJP and the Left. The BJP has alleged that the Chief Minister is not taking action against the miscreants who beat up a doctor at a government-run hospital in Kolkata, because they are "her voters".

Senior BJP leader Mukul Roy has alleged that members of a particular community had carried out the attack on doctors and that the perpetrators belonged to the Trinamool Congress.

"Providing security to the doctors is the responsibility of the Chief Minister of any state. Mamata Banerjee is not controlling or arresting the anti-social elements because they are her voters," said Bengal BJP chief Dilip Ghosh.

Mamata Banerjee has hit back, saying the BJP is giving the issue a communal colour and that outsiders had entered medical colleges and hospitals to create disturbances.

"The BJP, with help from the CPM, is indulging in Hindu-Muslim politics. I am shocked to see their love affair," Ms Banerjee was quoted as saying by news agency Press Trust of India. "BJP chief Amit Shah is encouraging his party cadre to create communal tension and run propaganda on Facebook," she said.

"I condemn the agitation. The junior doctors' strike is a conspiracy by the CPM and the BJP," the Chief Minister added.

The trouble had started on Monday when a junior doctor of the NRS Medical College and Hospital was assaulted by the relatives of a deceased patient for alleged negligence. A day later, junior doctors across the state went on strike demanding better security, which hugely affected services in hospitals.

This afternoon, Mamata Banerjee read the riot act to the doctors, saying there will be action if they don't get back to work by 2 pm.

The BJP has tied up the assault on the doctor with the general law and order situation, which the party contends is abysmal. There has been tension in the state due to repeated political violence since before the national elections.

Yesterday, the BJP workers fought a pitched battle with the police during a protest rally to the police headquarters in Kolkata.

"Everyone is very worried about the security condition in West Bengal because it is a border state," Dilip Ghosh said today.

The Centre has issued an advisory to the state asking that the law and order be strictly maintained.

Amid a buzz about Article 356 --- under which President's Rule can be imposed in the state -- Governor Kesari Nath Tripathi has invited representatives of all four main political parties of the state this afternoon to resolve the situation.