The flag meeting comes in the wake of several ceasefire violations by the Pakistan army in which five Indian security personnel were killed and seven others injured. 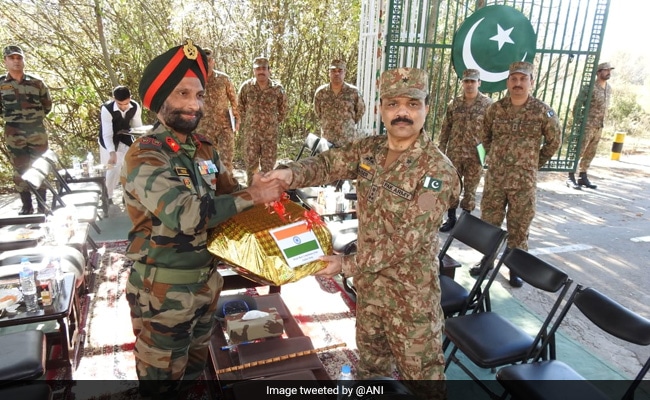 The Indian and Pakistan armies today held a brigade commander level meeting at a border crossing in Jammu and Kashmir's Poonch sector to adhere to ceasefire, a defence official said.

The flag meeting comes in the wake of several ceasefire violations by the Pakistan army in the past over one month, during which five Indian security personnel were killed and seven others injured.

The delegation had discussions on augmenting confidence building measures, maintaining peace along the LoC and preventing infiltration from Pakistan-occupied Kashmir, he said.

The meeting came on a day when security forces shot dead six Lashkar-e-Toiba (LeT) terrorist during an encounter in a forested area in Jammu and Kashmir's Anantnag district.

"The brigade commander level flag meeting was held between the Indian Army and the Pakistan Army at 1100 hours at the Poonch-Rawlakote Crossing Point," Lieutenant Colonel Anand said.

The meeting was held in a cordial and friendly atmosphere, and ended with both sides assuring to adhere to norms of the 2003 Ceasefire agreement and the Director-General of Military Operations (DGMO) level talks of May 29, he said.

The armies also decided to work towards improving the situation along the LoC, the PRO said.