Satinder Kaur, 62, was transported from DLF Phase 1, Gurgaon to Hi-Care Hospital, Ludhiana, about 350 km away, on May 5. 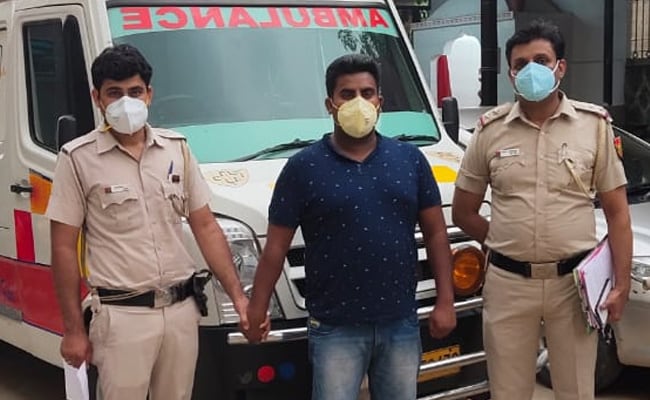 Mimohi Kumar Bundwal, an MBBS doctor, was arrested from Inderpuri in Delhi.

Delhi Police on Friday arrested one person after a patient's family was charged Rs 1.20 lakh for an ambulance to transport her from Gurgaon to a hospital in Ludhiana.

Satinder Kaur, 62, was transported from DLF Phase 1, Gurgaon to Hi-Care Hospital, Ludhiana, about 350 km away, on May 5.

This comes at a time when a sharp surge in Covid cases in the country is making people scramble for medical equipment and hospital beds. Several instances of overcharging patients' families for oxygen cylinders, medicines and ambulance service have come to the fore in the past few weeks.

A Delhi Police release said 29-year-old Mimohi Kumar Bundwal, an MBBS doctor, had been in the ambulance business for two years now. Over the last one month, he had been overcharging patients' families, the release said. He was arrested from Inderpuri in Delhi.

Speaking to the media, Amanjyot, son-in-law of the patient, said they were desperately looking for beds after her condition deteriorated when they got information that a bed was available in Ludhiana.

He got the number of the ambulance service from the leads circulating on social media and they asked for Rs 1.20 lakh, said Amanjyot. Desperate, the family agreed.

According to the Delhi Police release, the accused has now refunded the amount. The ambulance has been seized and further investigation is on, said police.

Taking note of multiple instances of patients' families being overcharged, the Delhi government has capped the charge private ambulance services can levy and warned of strict action against violators.

The Gurgaon administration too has fixed the rates for ambulance services, triggering protests from private operators.