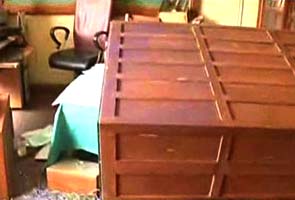 Pune: The office of Suhas Palshikar, one of the National Council of Educational Research and Training (NCERT) advisors who resigned from his post yesterday over the Dr BR Ambedkar cartoon row, was attacked today in Pune.

According to reports, two to three people went to meet the former NCERT official today and then attacked his office. They also reportedly shouted slogans in the name of Dr Ambedkar. Mr Palshikar, however, was not hurt during the attack.

"I don't want the people who ransacked my office to be punished because they have been provoked and I don't think punishment will help them. Their leaders should be told that this is not how debates are done. We may not hold the same view point but that doesn't allow anyone to ransack my office. We live in a democracy and difference of views must be respected," said Mr Palshikar.

Mr Palshikar along with fellow NCERT advisor Yogendra Yadav resigned on Friday after an uproar in Parliament over the controversial cartoon of Dr BR Ambedkar in the text books.

Today, Mr Yadav said that he does not believe the cartoon is an insult to Dr Ambedkar, and that its symbolism has to be understood correctly.

"I personally do not think that that cartoon denigrates Dr Ambedkar. He himself did not think it did so. Any cartoon or any piece of art must be understood by keeping in mind that you can't take a xerox copy of one particular thing and say, is it good or is it bad. First you have to understand the symbolism of it, if you start to take all piece of art literally, then you would have to ban, then you would have to ban all poetry in this country, all the art forms, and cartoons in this country," said Mr Yadav.

In fact, speaking to NDTV today, Dr Ambedkar's grandson Prakash Ambedkar also said that the cartoon was misinterpreted and that the NCERT advisors should not have quit.

"Dr Ambedkar's supporters have been hurt by the cartoon... Don't withdraw the book, delete the cartoon... the NCERT advisors should not have quit," he said.

The row has also angered the academic community which has condemned the hasty censorship which the government had resorted to.

"It is an unnecessary controversy... It is a classic case of constructed hurt and invented controversy... The government must allow for more public debate on this issue," said Zoya Hasan, a Political Science professor at the Jawaharlal Nehru University.

Promoted
Listen to the latest songs, only on JioSaavn.com
The cartoon in question depicts Dr Ambedkar, the author of the Indian Constitution, sitting on a snail and the country's first Prime Minister Jawaharlal Nehru standing behind him, brandishing a whip. The text alongside criticises Dr Ambedkar and suggests he went slow on framing the Constitution.

Sketched by renowned cartoonist Shankar in 1949, the cartoon has been part of the NCERT book since 2006. The MPs waved copies of the cartoon in Parliament yesterday and said it insulted both leaders. Human Resources Development (HRD) Minister Kapil Sibal later apologised, and said he had already directed NCERT to remove the cartoon on April 26 this year.