Sriharikota, Andhra Pradesh: India's heaviest rocket, which scientists like to call the "naughty boy of ISRO", has failed in half its missions of launching satellites into space. Today, the Geosynchronous Satellite Launch Vehicle (GSLV) cannot afford to fail. At 4:57 pm, it will lift off at Sriharikota in Andhra Pradesh carrying a 450-crore communications satellite that Prime Minister Narendra Modi has gifted to seven South Asian countries including Sri Lanka and Nepal. Pakistan refused to participate in the program, even as a beneficiary.

The control room of the Indian Space Research Organization or ISRO at Sriharikota is shaped like a flying saucer. Here, about 50 of India's best space engineers and scientists will be monitoring the heartbeat of the satellite and the sinews of the rocket that will take it into space. The satellite weighs about 2,230 kilos, as much as four full grown elephants, and is among the heaviest passengers the 414-kilo rocket has been tasked with transporting. The most tricky operation in a GSLV launch is the filling up of the super-cooled liquid oxygen and liquid hydrogen in the upper stage of the rocket. Hydrogen is highly inflammable, and huge caution has to be exercised.

Today's launch is the 11th mission for the 50-meter tall rocket, which entered service in 2001 and is powered by an Indian-made cryogenic engine. 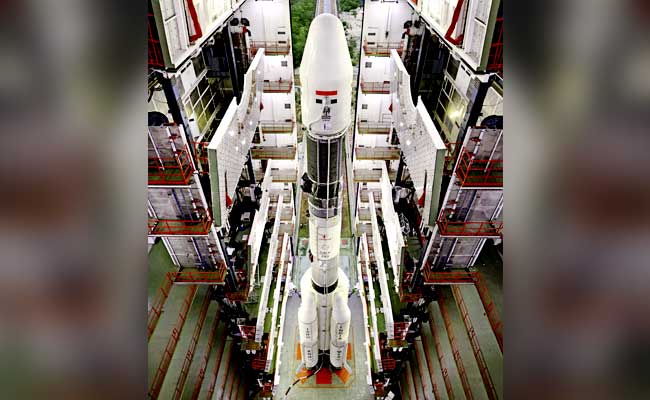 As scientists sweat over getting it right, tension is also likely to be noticeable at the Prime Minister's Office on Raisina Hill in Delhi. After the launch, leaders of the six beneficiary countries are expected to video-con their comments. This is unique space diplomacy undertaken by PM Modi - to the best of my knowledge, all other regional communications consortia in space are commercial ventures.

Through the day, several balloons have been floated up from Sriharikota to gauge wind velocities in the upper atmosphere and on the ground, the Range Safety Officer (RSO) has to ensure that the 5-km radius of the launch pad is free of any human ingress.

For any rocket launch, the final authority on allowing a lift-off does not rest with the Prime Minister or with the Chairman of ISRO, but with the Range Safety Officer alone. If things go wrong, the officer is also the only authority who can decide whether to to destroy the rocket. In 2006, that's what was ordered when an earlier iteration of the GSLV moved off-course and could have turned into a disaster for Chennai.

While this mission is a first on some accounts, it also remarks a new low for ISRO in transparency. There will be no media present at India's space port to document this historical mission. Ideally, ISRO and the Ministry of External Affairs should have brought in media from all the seven beneficiary nations and from other parts of the world to witness this unique mission. But for some reason, opaqueness is the prevailing mood.
Comments
ISROISRO GSLV LaunchISRO GSLV Launch TodayISRO GSLV GSAT-9 LaunchSriharikota satellite launch centreSAARC SatelliteSAARC Communication SatelliteNarendra Modi SAARCNarendra Modi Gift To SAARCISRO Control Room