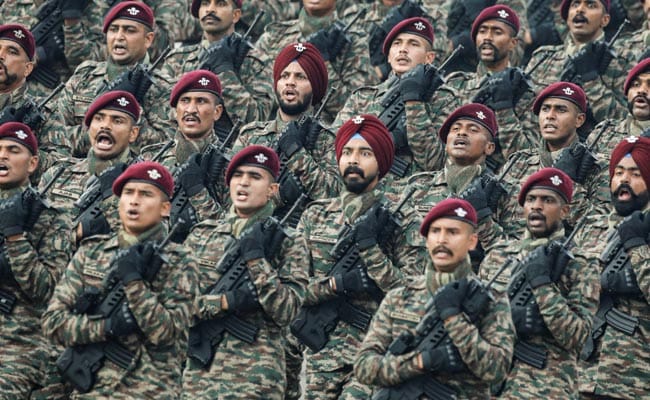 The Centre today launched the armed forces' ‘Agnipath' recruitment campaign. The initiative is aimed at targeting more youth in the armed services. This scheme is expected to reduce the average age profile of the Indian armed services by 4-5 years.

Soldiers will be freed after four years of duty under the scheme, with only 25 per cent of the top professionals being re-inducted as permanent members. Those recruited under the scheme will have their own rank in each of the three services, as well as a unique insignia on their uniform.

Here are the key details of the scheme:

‘Agnipath' is a short-term service youth recruitment scheme for the armed forces that operates across India. Agniveers will be the name given to those chosen for the scheme, and they will serve in a variety of terrain such as deserts, mountains, land, sea, and air.

Approximately 45,000 people between the ages of 17.5 and 21 will be inducted into the service for a four-year period under the scheme. The recruitment process will begin in the next 90 days, with the first batch expected to be completed by July 2023.

The selection will be made using a centralised online method. Agniveers will be required to have the same educational requirements as normal officers in the armed forces.

Women will be inducted in the ‘Agnipath' scheme as well.

Agniveers will be hired for four years under the ‘Agnipath' scheme and will get intensive military training. They will be given a monthly wage of Rs 30,000 to Rs 40,000 per month, plus allowances.

After four years, Agniveers would be given the option to voluntarily apply for registration in the permanent cadre. These applications will be evaluated based on merit and service performance. It's possible that up to 25 per cent of submissions will be accepted.

The armed forces' websites — joinindianarmy.nic.in, joinindiannavy.gov.in, careerindianairforce.cdac.in — will provide information on vacancies and the application process.

After four years, the Agniveers will get a one-time ‘Seva Nidhi' package that is tax-free. According to the Ministry of Defence, there will be no right to gratuity or pension benefits.

#AgnipathRecruitmentScheme | On completion of the engagement period of 4 years, 'Agniveers' will be paid one-time 'SevaNidhi' package... which will be exempt from Income Tax. There shall be no entitlement to gratuity & pensionary benefits: Ministry of Defence pic.twitter.com/dFae7Qi9yx

Individuals chosen for enlistment in the Armed Forces as regular cadre would be compelled to serve for a minimum of another 15 years.

The individuals, selected for enrolment in the Armed Forces as regular cadre, would be required to serve for a further engagement period of a minimum of 15 years: Ministry of Defence

Agniveers would receive the same level of training as regular armed services personnel, including tough military exercises. The highest authority in the Armed Forces would explicitly define and supervise the training standards.

Russia: All men between the ages of 18 and 27 are required to serve in the military for one year, and recruitment campaigns are undertaken in the spring and fall. The spring campaign runs from April 1 to July 15, while the autumn campaign runs from October 1 to December 31. During these times, men between 18 and 27 who are in good health and have no outstanding convictions are called upon to service.

Sweden: The Swedish government decided to restart military conscription in 2017, citing rising national security risks. Over 4,000 women and men were called up for service since 2018. A total of 13,000 young people were picked from a pool of conscripts.

Israel: Men and women in Israel are conscripted at the age of 18 and serve for two to three years before being assigned to active reserve forces. This universal draught has some exclusions. Married women, Arabs, ultra-orthodox males, and those deemed undesirable are either exempted or released early.

France: The French Foreign Legion, the national army's elite infantry force, is based in France. This all-male battle group consists of 9,000 men from 140 different countries. The members pledge allegiance to the Legion itself, whose motto is Legio Patria Nostra, (The Legion is our Fatherland).