After Basic Income, Congress's Next Big Promise: Farm Loan Waiver For All

Lok Sabha Polls: The promise of loan waivers has already worked for the Congress in the heartland states of Rajasthan, Madhya Pradesh and Chhattisgarh. 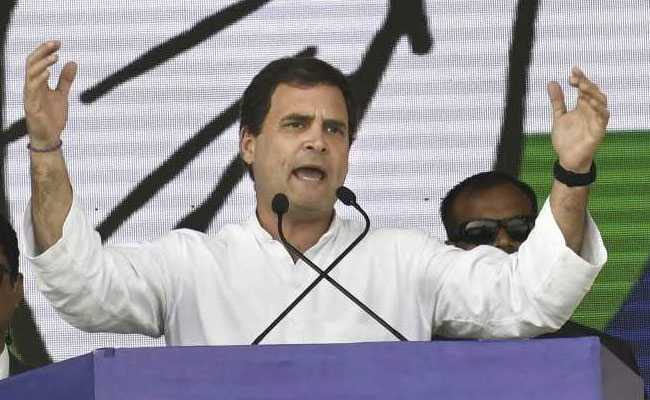 Congress chief Rahul Gandhi, who has already announced a basic income scheme for the poor, today announced a loan waiver for all farmers across the country if the party comes to power.

The promise of loan waivers has already seen as having worked for the Congress in the heartland states of Rajasthan, Madhya Pradesh and Chhattisgarh in the recent assembly elections. Mr Gandhi had bragged that the new governments have started delivering on it too within days of coming to power.

"Loan waiver will be granted to all the farmers across the country if the Congress comes to power," Rahul Gandhi said at a rally in Patna today, sharing stage with ally Tejashwi Yadav, Sharad Yadav and other opposition leaders from the state.

"Modi-ji has insulted the farmers of Bihar and the rest of the country," he said. "If you insult the farmers, then the farmers will give you an answer. Farmers are saying 'we want Congress, not the BJP'," he added.

The Congress announcement comes two days after the government announced a cash transfer scheme for small and marginal farmers in the interim budget. With the national elections around the corner, the need to provide relief to farmers was seen as a priority.

Loan waivers, however, are not seen as a way to address the problems of the farm sector and the government, after some deliberation, had opted for a cash transfer scheme after states like Odisha and Telangana.

The Congress, which has been highlighting the farmers' woes for the last four years, has alleged that the government's allocated sum of Rs 6,000 a year was "peanuts", even though it meant a burden of Rs 75,000 crore on the exchequer.

Today, Prime Minister Narendra Modi launched a sharp attack in the Congress over the loans issue.

The Congress, he said, had come to power on a loan waiver promise 10 years ago, but had "fooled" everyone.

While the loan amount was known to be 6 lakh crore, it later turned out to be 52,000 crore. "When CAG (Comptroller and Auditor General) investigated, they found out some 30 to 35 lakh people were not even worthy of this loan," PM Modi said.