Many of the tweets alluded to the string of name changes that Yogi Adityanath's BJP government in Uttar Pradesh had ordered since coming to power in 2017. 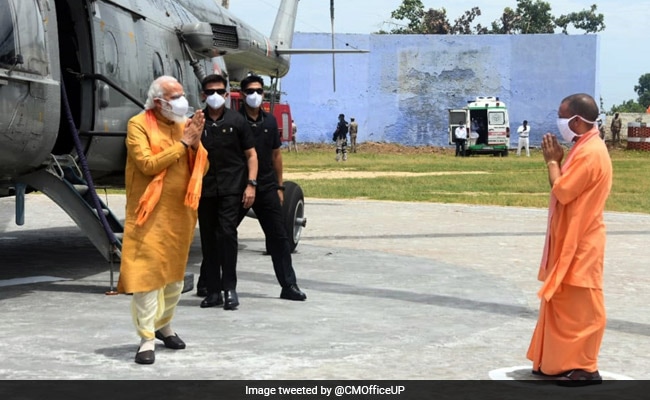 Months after earning the internet's indignation for a renaming spree of places in Uttar Pradesh, Chief Minister Yogi Adityanath found himself as the subject of a revival of the memes courtesy Prime Minister Narendra Modi.

During the lavish ground-breaking ceremony on Wednesday for the Ram Temple to be built in Ayodhya, PM Modi addressed the Chief Minister as "Aditya Yoginath".

"Present on stage, the energetic, renowned, popular Chief Minister of Uttar Pradesh Aditya Yoginath ji," the Prime Minister said, as the camera cut to the BJP leader's face for a quick reaction.

The gaffe instantly set off a wave of reactions on social media, making "Aditya Yoginath" one of top Twitter trends on Wednesday afternoon with hundreds of tweets.

When you love your Best Friend with all your heart and he mispronounces your name as 'Aditya Yoginath' in front of whole nation #YogiAdityanath#AyodhyaRamMandirpic.twitter.com/CCVZLYkf1A

When you are Famous For Changing Names,And Modiji Calls You "Aditya Yoginath" Instead of "Yogi AdityaNath"
Le #Yogijipic.twitter.com/Mc2qWSw6Nx

Many of the tweets alluded to the string of name changes that the BJP government in Uttar Pradesh had ordered since coming to power in 2017.

Allahabad was renamed to Prayagraj, Faizabad district was changed to Ayodhya, and the iconic Mughal Sarai train station was renamed after BJP ideologue Pandit Deen Dayal Upadhyay in an exercise seen as an effort to trim the legacy of the Mughals.

While some had welcomed the moves, contending that the new names reflect the desires of most of the state's residents and are efforts at reclaiming overwritten identities, others criticised them as blatant majoritarianism and overwriting established historical nomenclature.

The campaign inspired several memes including one showing Yogi Adityanath speaking on a phone, accompanied with photos of celebrities christened with new Indian-ised names with the caption "Aaj Se Tumhara Naam (From Today Your Name Is...)".

Wednesday's slip by PM Modi spelled a return of the memes, this time featuring Yogi Adityanath as the one to have been renamed.