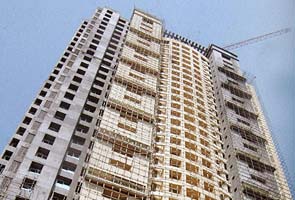 New Delhi: How the Maharashtra government bulldozed its way into sanctioning the controversial Adarsh Society building in Mumbai becomes clearer every day. It's not just the frenzy of broken rules that is startling - there were no kid gloves involved in how flats meant for war widows and veterans ended up with politicians, bureaucrats and retired Army officers. (Read: Where are the Kargil martyrs in the allottees? | Was this General the mastermind?)

Maharashtra Chief Minister Ashok Chavan has offered his resignation after it was proven that his family members had been allocated flats here. The Congress is reviewing the Adarsh scam and will decide later about whether Chavan will exit. (Read: Chavan stays for now)

Now, new documents accessed by NDTV prove that despite those objections, barely a month later, the controversial building was issued an Occupation Certificate (OC).  The Army and Navy were also told not to ask for a list of flat-owners because former chiefs of the Army and Navy, along with senior bureaucrats and politicians were to become residents of the building. (Read: Adarsh Society a security risk, said Army and Navy recently)

The message was clear: this was VVIP territory. And it was sent by the MMRDA or Mumbai Metropolitan Regional Development Authority.

The Western Naval Command responded to this with a note on October 25. Addressed to the Chief Secretary of Maharashtra and the Mumbai Municipal Commissioner, the Navy stated sternly that security implications were being ignored. The letter made specific reference to 26/11, when Pakistani terrorists sailed into Mumbai to unleash the country's worst-ever terror attacks. (Read: Adarsh Society a security risk, said Army and Navy recently)
Comments
Adarsh Society ScamArmy and Adarsh society

India's First Coronavirus Vaccine May Be Launched By August 15