Where Are The Bodies Buried In North Korea? Investigators Are Preparing For Future Trials.

There is no sign of imminent change in the North, but previous atrocities show the importance of being ready to collect evidence. 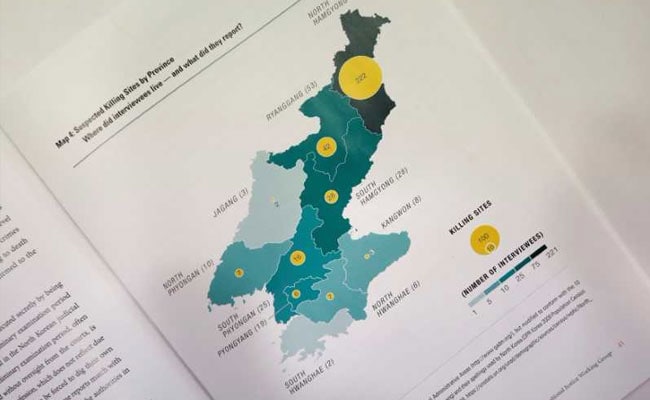 A Seoul-based groups has mapped sites of mass killings and mass burials in North Korea. (Reuters)

SEOUL: Efforts to hold the Kim regime accountable for decades of brutality against the North Korean people have so far amounted to little, but that isn't stopping human rights activists from trying to document the abuses.

The latest effort is an ambitious project by the Seoul-based Transitional Justice Working Group that aims to map sites of mass killings and mass burials in North Korea so that - one day - evidence can be collected and the regime can be held responsible.

"Victim testimony was often given a limited place in previous hearings, like those on the former Yugoslavia and on the Holocaust," said Sarah Son, one of the authors of the mapping report, which will be published Wednesday. "But location-based data provides a bigger picture on patterns of abuse within a country."

The research was backed by the National Endowment for Democracy, which seeks to bolster civil society and democratic institutions around the world and is financed by the U.S. Congress.

The working group interviewed 375 defectors from North Korea over the past two years. They were shown maps of their home towns and asked to identify places where abuses occurred. The researchers say they have been able to pinpoint 47 locations that might yield documentary evidence in the future.

There is no sign that Kim Jong Un, the third-generation leader of North Korea, or his regime is going to change or collapse anytime soon, but Son said it is not too early to plan.

"People who have done this kind of work in Croatia or Southeast Asia keep telling us we can't be too prepared for what might happen in the future," she said.

The report says that the mapping project could contribute to "the collective effort to support the push for accountability, as well as . . . future efforts to institute a process of transitional justice following a change in the political conditions in North Korea."

North Korea's regime is known to be one of the most brutal in the world, using repression and fear to keep its 25 million citizens under control. It has always denied human rights investigators access to the country.

A landmark report by a United Nations commission of inquiry in 2014 detailed a litany of abuses committed in North Korea over the decades, including torture, hard labor in political prison camps, forced abortions and infanticide, and brainwashing. This is in addition to the hunger and inability to speak their minds that ordinary people endure on a daily basis.

The commission recommended referring Kim to the International Criminal Court to face charges of crimes against humanity, a recommendation that elicited an unprecedented response from Pyongyang. North Korean diplomats at the United Nations began engaging critics for the first time, and the regime released its own report on American "human rights abuses."

But the efforts did not result in Kim being referred to the ICC because the recommendations could not get through the Security Council, where China and Russia, North Korea's historic patrons, wield vetoes.

"The commission of inquiry report was not the end, it was just the start," said Oh Se-hyek, a North Korean defector and another of the report's authors. "We must continue that work."

The group asked North Korean defectors to point out places in their home towns where they had directly seen or heard executions or mass burials taking place, or where they had heard from a witness of such an event happening.

By cross-referencing the places the defectors identified, the group came up with 47 sites where forensic evidence might be collected in the future, and sites such as police stations or security offices where documents might be found.

Most of the sites were in North Hamgyong, a province that shares a long border with China. This province is the source of most defectors from North Korea because of the ease in crossing into China from there and because the residents - whose loyalty Pyongyang considers suspect - are most neglected by the regime.

One former political prisoner reported having seen a list of more than 100 inmates who had been executed in secret over the course of a year, in 1999. The list was held by the state security agency and the local police office operating within the camp, the former prisoner said.

North Korea, like other authoritarian regimes, keeps systematic records, so securing these documents could be important for future trials, just as Stasi documents were important after the collapse of East Germany, the report's authors wrote. "We aim to record the locations of these sites for future safeguarding of documents."

Promoted
Listen to the latest songs, only on JioSaavn.com
The group did not disclose the locations of the burial sites or the potential document repositories, saying it feared that the North Korean regime would seek to destroy any evidence if it knew certain sites had been identified.