The photograph tweeted by AAP shows a young boy dressed as Arvind Kejriwal. 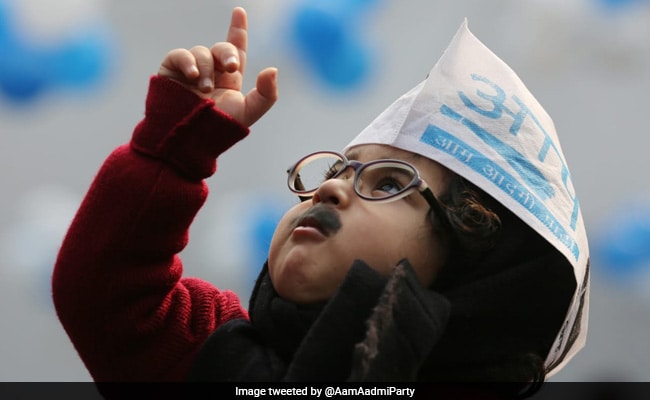 A picture tweeted by the Aam Aaadmi Party.

Aam Aadmi Party chief Arvind Kejriwal's favourite winter accessory has spawned jokes, memes, and now, an adorable copycat too. As counting began for the Delhi election this morning, the Aam Aadmi Party tweeted an image of a young boy dressed up as Mr Kejriwal, who is contesting for a third term from the New Delhi Assembly constituency.

The photograph tweeted by AAP shows a young boy dressed as the 51-year-old - complete with an AAP cap, a painted-on moustache, a maroon pullover, and, of course, the signature muffler.

The picture has collected more than 2,500 'likes' and hundreds of comments on the microblogging platform.

Mr Kejriwal - "Mufflerman" to many of his fans on social media - was spotted in his favourite accessory when he stepped out to cast his vote on Saturday. He is pitted against Sunil Yadav of the BJP and Romesh Sabharwal of the Congress.

Arvind Kerjriwal's muffler has made news in the past as well, most recently in December when he responded to a Twitter user who asked him why he had not been spotted in one recently.

AAP has surged ahead of the BJP in early leads, but remains below the 67 seats it won in 2015. The BJP, after a slow start, made steady gains, moving ahead in around 20 seats.