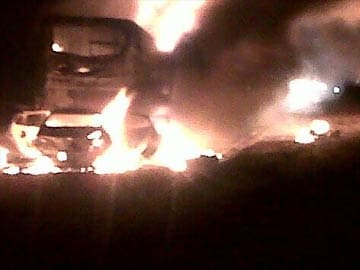 Mumbai: Seven people were killed in Maharashtra when a luxury bus caught fire after colliding with a diesel tanker on the highway, late on Tuesday night.

Fourteen others were injured in the accident, which took place at around 1 am near Manor on the Mumbai-Ahmedabad highway, when most passengers were sleeping. The bus was travelling from Pune to Ahmedabad.

Emergency services and top police officers rushed to the spot and traffic was stopped on the highway for four hours. The police say it will take a few hours for normal traffic to resume.

Promoted
Listen to the latest songs, only on JioSaavn.com
"We had to be very careful in our operations as there was a diesel tanker and a risk of explosion," said a senior police officer at the accident site.