Doctors at the Aware Gleneagles Global Hospital removed the kidney stones from Veeramalla Ramalakshmaiah, a resident of Nalgonda, through keyhole surgery. 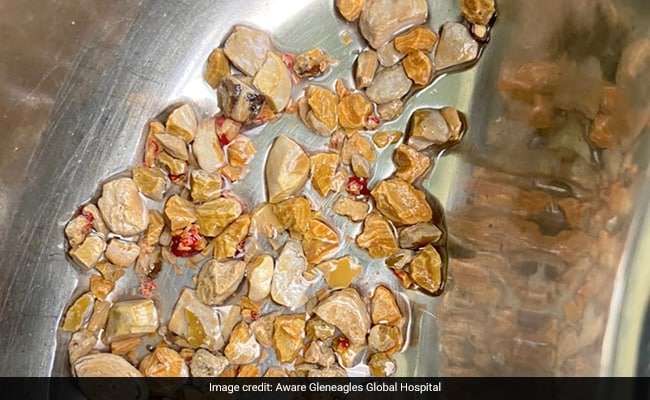 The man had been on medication prescribed to him by a local health practitioner.

After a painful six-month ordeal, a 56-year-old man from Hyderabad got some respite when doctors removed 206 kidney stones after an hour-long surgery.

Doctors at the Aware Gleneagles Global Hospital removed the stones from Veeramalla Ramalakshmaiah, a resident of Nalgonda, through keyhole surgery. He had been on medication prescribed to him by a local health practitioner which was only able to provide him temporary relief.

The pain, however, continued to impact his daily routine, and he was not able to perform his duties efficiently.

Dr Poola Naveen Kumar, Senior Consultant Urologist at the hospital, said, "Initial investigations and an ultrasound scan revealed the presence of multiple left renal caliculi (kidney stones on the left side), and the same was reconfirmed with CT Kub scan."

The doctor said the patient was counselled and prepped for a keyhole surgery that last one hour, during which all stones were removed.

Dr Naveen Kumar was supported by Dr Venu Manne, Consultant Urologist, Dr Mohan, Anesthesiologist, and other members of the nursing and support staff in the procedure.

Mr Ramalakshmaiah recovered well after the procedure, Dr Naveen added, and was discharged on the second day.

Doctors at the hospital added that high temperatures in summer increased cases of dehydration among people, which could result in formation of stones in the kidneys. They recommend that people consume more water, and coconut water, if possible, to keep themselves hydrated.