PM Modi roadshow in Varanasi: Seventy one constituencies, spread over nine states, will go to polls in the fourth phase on Monday. 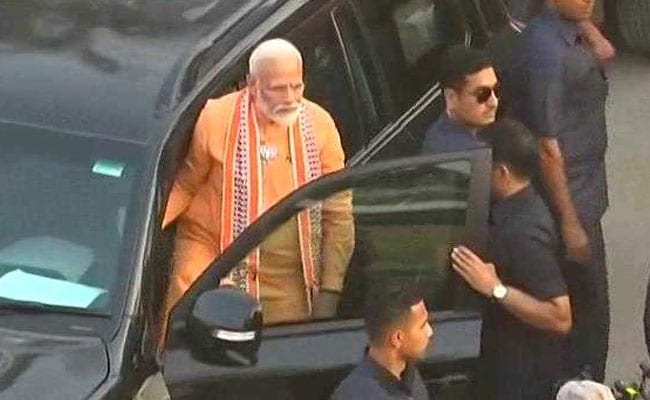 Prime Minister Narendra Modi began his mega roadshow today in Varanasi, the Uttar Pradesh temple town from where he will contest for the second time. In a saffron kurta and scarf, the Prime Minister waved at thousands of people on the roads cheering for him from the sunroof of his SUV. PM Modi arrived in Varanasi today for a two-day trip to his Lok Sabha constituency, which will culminate with the Prime Minister filing his election papers from the seat tomorrow. PM Modi is leading a roadshow starting from the gates of the Banaras Hindu University, passing through ancient temples and ghats.

Seventy one constituencies, spread over nine states, will go to polls in the fourth phase on Monday.

Congress leader Priyanka Gandhi was on a tour of the Bundelkhand region where the SP-BSP-RLD combine is taking on the BJP, which holds all the 19 assembly and four Lok Sabha seats. She led a road show in Jhansi city and a public meeting in Gursarai and another road show in Orai.

Here are the LIVE updates from Lok Sabha election campaigning: 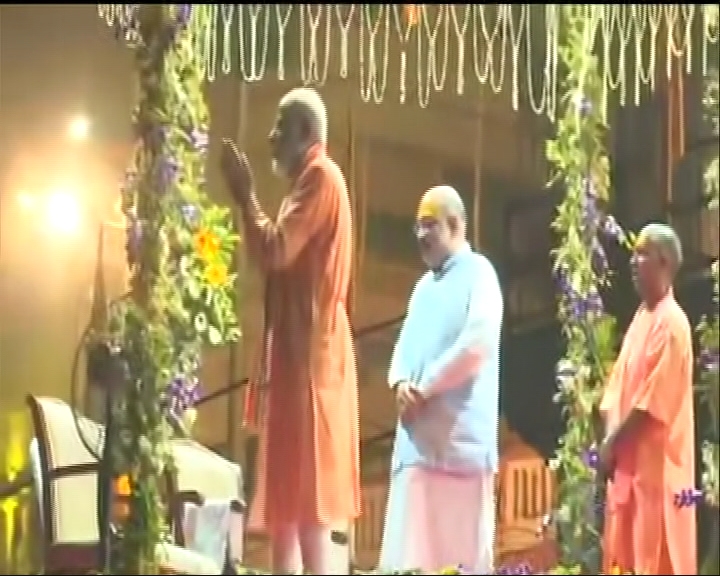 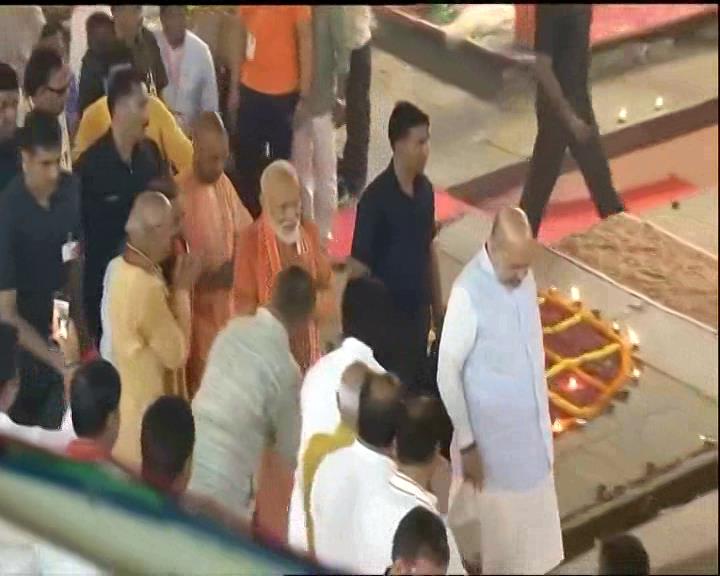 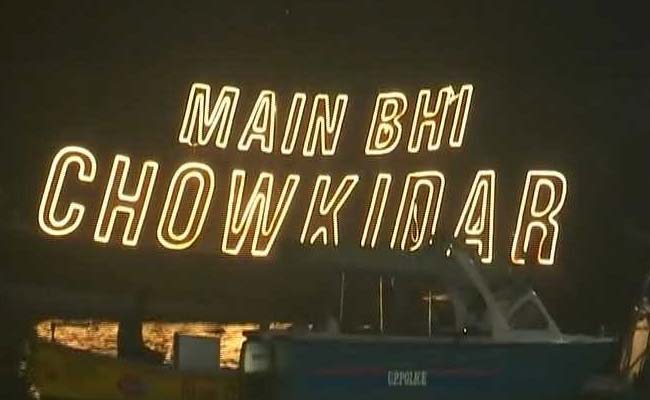 Prime Minister Narendra Modi holds roadshow in Varanasi. He will file his nomination tomorrow for #LokSabhaElections2019pic.twitter.com/vOTYMzyPah

Apr 25, 2019 15:04 (IST)
PM Modi in Banda:
Banda will reject opportunists of Samajwadi Party and Bahujan Samaj Party.
The SP and the BSP are working to share the certificate of my caste and have been abusing the entire backward society on the pretext of Modi. That is the essence of their politics. They can only think of caste and creed.
You tell me which caste were the great Bhagat Singh, Sukhdev, Rajguru, Jhansi Rani and Subhas Chandra Bose. Not a single great man is known by his own caste but is known by his actions. Everyone was a resident of Bharat.
Apr 25, 2019 14:57 (IST)
Congress President Rahul Gandhi addresses public meeting in Ajmer, Rajasthan.
Apr 25, 2019 14:55 (IST)
Aam Aadmi Party (AAP) lawmaker Nazar Singh Manshahia joins Congress in presence of Punjab CM Captain Amarinder Singh, reports news agency ANI.
Apr 25, 2019 14:30 (IST)
Congress betrayed us, says Samajwadi leader Akhilesh Yadav.
Apr 25, 2019 14:30 (IST)
Addressing a rally in Ghazipur constituency of Uttar Pradesh, BJP chief Amit Shah says BSP chief Mayawati and her Samajwadi Party and Congress counterparts, Akhilesh Yadav and Rahul Gandhi, respectively, are upset with the Balakot airstrikes.
"These 'mahamilavati' people talk about the country. Akhilesh, Mayawati and Congress cannot keep the country safe," the BJP chief adds.
Apr 25, 2019 14:19 (IST)
PM Modi addresses Public Meeting at Banda, Uttar Pradesh.
Apr 25, 2019 14:19 (IST)
Congress announces three candidates for by-elections to the Legislative Assembly in West Bengal, reports news agency ANI. Alhaj Muzaffar Hussain, Rejina Murmu and Khwaja Ahmed Hussain have been fielded from Islampur, Habilpur and Bhatpara respectively.
Apr 25, 2019 14:11 (IST)
Kanhaiya Kumar, CPI LS candidate from Begusarai, tells news agency ANI: "I have full confidence that the people of Begusarai will vote on their issues and their issues are to build a university, a hospital, good roads, adequate water supply and fair price to farmers for their crops."
Apr 25, 2019 13:51 (IST)
BJP's Kirron Kher files nomination from Chandigarh constituency, reports news agency ANI. RJD candidate Misa Bharti files nomination from Pataliputra constituency in Bihar.
Apr 25, 2019 13:49 (IST)
Election Commission is of the view that the movie 'PM Narendra Modi' should not be released till May 19. Poll Body officials say delaying the release will be in the interest of free and fair Lok Sabha elections.
Apr 25, 2019 13:08 (IST)
Congress leader Priyanka Gandhi leads roadshow in Jhansi in Uttar Pradesh.
Apr 25, 2019 12:30 (IST)
Ajai Rai to contest from Varanasi
Congress fields candidate Ajai Rai from Varanasi, Uttar Pradesh, for Lok Sabha Elections.
Madhusudan Tiwari to be the Congress candidate from Gorakhpur.

Congress Central Election Committee announces the next list of candidates for the ensuing elections to the Lok Sabha from Uttar Pradesh. pic.twitter.com/zyol8wPd06

Apr 25, 2019 12:20 (IST)
Arvind Kejriwal Speaks After Releasing Manifesto
For Aam Aadmi Party, the most important thing in the manifesto is that we will defeat the divisive BJP, says Arvind Kejriwal.
"AAP will work towards providing Delhi full statehood. This too is an important part of our manifesto. All the seven seats in Delhi are important for government formation at the Centre."
"If Delhi gets full statehood, women will become safer."
Apr 25, 2019 12:15 (IST)
Arvind Kejriwal quotes BJP chief Amit Shah who had recently said "we will remove all infiltrators from this country except except Buddha, Hindus and Sikhs"
He says: "This means that the BJP regards Christians, Muslims and all other religions as infiltrators. And it says it will remove them from the country. Will they throw these people in Pacific ocean. Should we say this is BJP's one-line manifesto. The 2019 election is to save the country from this BJP one-line manifesto."
"Today, the country's culture, unity are under attack... If the country gets divided on the basis of caste, on the basis of religion... nobody will be able to save our country."
Apr 25, 2019 12:10 (IST)
Aam Aadmi Party manifesto released
Aam Aadmi Party leader and Delhi chief minister Arvind Kejriwal releases manifesto for 2019 Lok Sabha Elections.
The 2019 election is not just an election to elect a party. It is an election that will give us a chance to save the democracy, he says.
Apr 25, 2019 11:56 (IST)
BJP chief addresses a public meeting in Ghazipur, Uttar Pradesh.
Apr 25, 2019 11:55 (IST)
Actor Anupam Kher campaigns for his wife and BJP candidate, Kirron Kher in Chandigarh. Uttarakhand Chief Minister Trivendra Singh Rawat also present, reports news agency ANI.
Apr 25, 2019 11:54 (IST)
I congratulate Nitish Kumar and Sushil Modi for having brought the days of lantern to an end in Bihar and bringing electricity, says PM Modi in Darbhanga.
Apr 25, 2019 11:29 (IST)
National security may not be an issue for those who do 'mahamilavat' but in new India, it is a big issue, says PM Modi in Bihar.
Apr 25, 2019 11:16 (IST)
PM Modi in Bihar says: "New India will go to terror sites and we will kill them there. Darbhanga also saw terror very closely. Your chowkidar is alert. There will be no module and no terrorist will be spared."
Apr 25, 2019 11:01 (IST)
PM Modi addresses rally in Bihar's Darbhangha
Some people have a problem with 'Bharat mata ki Jai' and 'Vande mataram'. Should such people lose their deposits or not? These are same people who complain when I talk about Bharat (India). They also say "why is Modi talking about terrorism, it is not an issue."
NDA "gathbandhan" is trusted. For us security, peace and the development of our country is the goal.
In Sri Lanka, 359 people were killed. Our neighbourhood has terror factories running. If someone lost the battle with terror, it is the poor people.
Apr 25, 2019 08:50 (IST)
Congress President Rahul Gandhi is expected to hold public meetings at Jalore, Ajmer and Kota in Rajasthan today while BSP chief Mayawati is scheduled to address public rallies in Shahjahanpur and Kannauj in Uttar Pradesh.
Apr 25, 2019 08:33 (IST)
Prime Minister Narendra Modi is scheduled to address a public rally at Darbhanga in Bihar today.
2019 Lok Sabha Elections LIVE UpdatesPrime Minister Narendra ModiPriyanka Gandhi