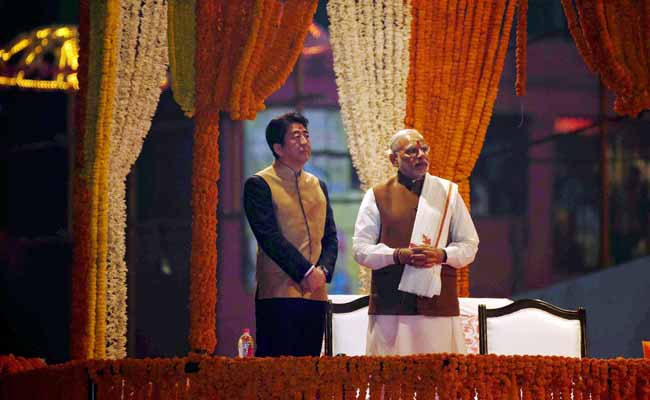 Shinzo Abe's visit to India in December was one of the many highs of PM Modi's diplomacy in 2015.

New Delhi: 2015 was Prime Minister Narendra Modi's first full year in office and brought his government a mixed bag of successes, setbacks and controversy. Through it all, PM Modi remained one of the top-searched people on the internet, trending often on social media and being rated by Forbes as the 9th most influential leader in the world, up six places from last year.

PM Modi began the year on a high, with US President Barack Obama visiting India on his invitation to be chief guest at the Republic Day Parade. As it ends, India and Pakistan are talking to each other again after nearly three years, but a persisting logjam in Parliament threatens to derail the big-ticket reform of turning India into a single market with the launch of the Goods and Services Tax regime.

The economy picked up in 2015 and at 7.3 per cent growth, it promises to be the world's fastest growing economy in 2016. India jumped 12 positions in the World Bank's Ease of Doing Business index to rank 130th and topped the foreign direct investment rankings, ahead of China and the US.

PM Modi strengthened his position continuing his engagement with world leaders. The American president after his sixth meeting with Mr Modi since September 2014, said on the side lines of the UN conference on climate change that he saw Mr Modi as someone who has a clear vision for India and the US-India relationship.

But the ruling BJP, the PM's party, faced a humiliating defeat in two important state elections this year in Delhi and in Bihar, where the party did not name a chief ministerial candidate and projected PM Modi as the face of its campaign. The defeats were a blow to PM Modi's efforts in building muscle in the Rajya Sabha or upper house in parliament where his government is in a minority and find most of its key reforms blocked by the opposition.

The winter session of Parliament began this month with Mr Modi delivering a conciliatory speech in which he described "consensus and not majority rule" as the essence of democracy. It was seen by many as a departure from the past and a speech that will guide how the BJP deals with the opposition in the near future.

His party had so far asserted its right to push through legislation in Parliament based on its absolute majority in the Lok Sabha that it won under PM Modi in the 2014.

When President Obama visited in January, the ruling BJP said that a US President attending the parade could have only been possible under PM Modi. But in the euphoria, there was also controversy. The stripes on a suit that PM Modi wore at reception for the American president read NARENDRA DAMODARDAS MODI and photos went viral on social media.

The controversy gave PM Modi's political opponents a reason to attack him and the Modi government earned the sobriquet "Suit Boot ki Sarkar" (a government of the suited-booted). The phrase was used again and again by Congress vice president Rahul Gandhi, especially when the government attempted to push through another major reform that sought to change the land acquisition law. The Congress and other parties alleged the amendments made to the bill by the BJP-led government were "anti-poor and anti-farmer."

The Modi government was also criticised for enforcing the changes in the land law through an ordinance. Without consensus in Parliament, it eventually withdrew the amendment bill in the monsoon session and allowed the ordinance to lapse.