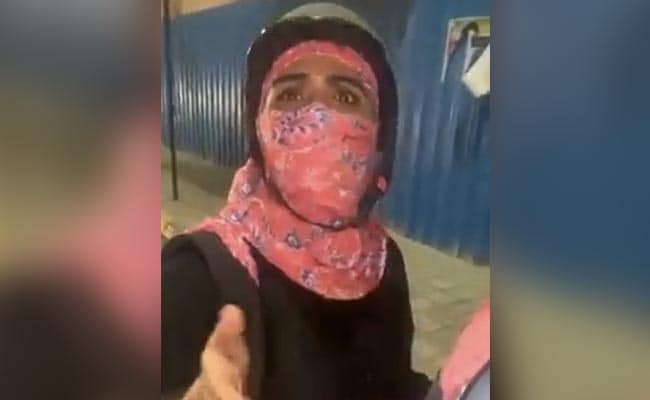 The people who assaulted her colleague asked her to then take an autorickshaw ride back home.

Two persons have been arrested in Bengaluru in a case of moral policing after a video showed them assaulting a bank employee for having a Muslim woman colleague ride pillion on his motorcycle.

The arrests were made on Saturday over the incident that took place in the Dairy Circle area of the city on Friday. The video of the incident, reportedly shot by the assaulters themselves, was shared widely on social media and messaging platforms with a watermark of "National Defence Force" written in Kannada.

The video of Friday's attack shows two persons stopping the man and his woman colleague and questioning the reason they were travelling together. Speaking in Kannada and Urdu, they asked the woman, in Muslim attire, why she was travelling with a non-Muslim.

They abuse and threaten the duo, employees of a private bank, even as the woman tries to explain. Prefaced with expletives, one of the assaulters menacingly says in Kannada, "If you ever take another woman in a burkha..." before striking the man on the helmet he is wearing.

Turning to the woman, the assaulter shifts to Urdu, asking, "What's your name? Aren't you ashamed...? Don't you know the kind of times we live in? Why do you behave like dogs and cats?"

They then call her husband, asking why he "allows his wife to travel with a non-Muslim". One of them is heard even abusing her husband saying "it is people like you who defame the community".

All through this, they keep landing punches and slaps on the man, still wearing his helmet. The assaulters then force the woman to get off her colleague's bike and ride home in an autorickshaw.

After the video went viral, a case was registered at the SG Palya Police Station. "We arrested both the accused within 12 hours, acting swiftly," said Shrinath Mahadev Joshi, Deputy Commissioner of Police of Southeast Bengaluru.