2 Congress MLAs From Himachal Join BJP Months Ahead Of Poll

Both the leaders said they were impressed by Prime Minister Narendra Modi's "inspirational leadership" and were joining the BJP due to the BJP's "pro-people" policies. 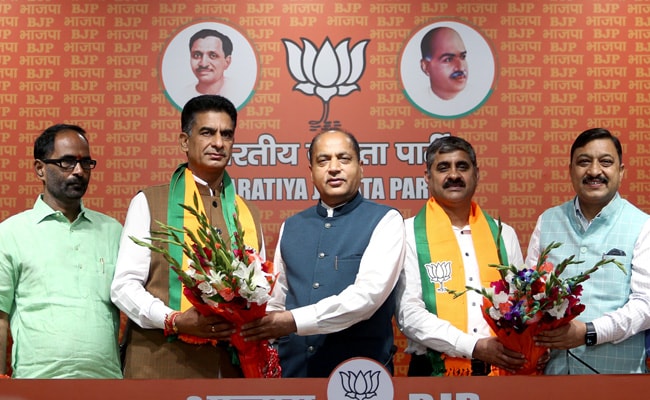 Jai Ram Thakur welcomed the two leaders in the party.

Two Himachal Pradesh Congress MLAs -- Pawan Kajal and Lakhwinder Rana -- joined the BJP in New Delhi in the presence of Chief Minister Jai Ram Thakur who said his party will break the trend of governments being voted out every assembly poll in the state. Congress' Kangra MLA Kajal and Nalagarh representative Rana, who is also the party's state working president, joined the BJP just months before the assembly elections in Himachal Pradesh.

Apart from Mr Thakur, BJP national general secretary Arun Singh was also present at the event when the two Congress leaders switched over the the saffron party.

Mr Thakur welcomed the two leaders in the party.

"This time the party will break the trend of changing government in Himachal Pradesh and will retain the power," he told a press conference at the BJP headquarters here.

Both Mr Kajal and Mr Rana said they were impressed by Prime Minister Narendra Modi's "inspirational leadership" and were joining the BJP due to the BJP's "pro-people" policies.

The state will go to poll later this year.