Shabnam Ali was sentenced to death for killing seven members of her family, including a baby, in 2008. 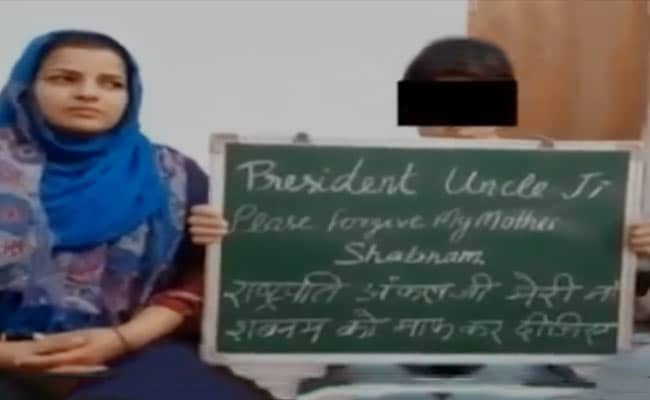 A prison in Uttar Pradesh is preparing for what could be the first-ever hanging of a woman convict in independent India. Shabnam Ali was sentenced to death for killing seven members of her family, including a baby, in 2008.

"I love my mother. I have only one demand for President uncle, that he doesn't let my mother be hanged," Taj told reporters on Thursday.

Standing on a chair, he held up a slate with a written request seeking "forgiveness" for his mother. "It is up to the President to forgive her. But I have faith," he said.

Taj lives with his foster parent Usman Saifi, a journalist who wrote on Shabnam's case and visited her in prison. He visits his mother frequently.

"Whenever I go, she hugs me and then asks me 'how are you son? What are you doing? When is your school opening? How are your studies progressing? You don't trouble your father and mother, right?' - These are the questions that she asks," he said.

Usman Saifi said: "We are trying our best to give him better education, to make him a good man. The message is that no matter what crime his mother has been convicted for, the child is not a criminal."

A court in Uttar Pradesh's Amroha is yet to finalise a date and time for Shabnam's hanging, as requested by the state government. But a jail in Mathura, the only one in the country where there is an execution chamber for women, is prepping for a possible hanging.

Shabnam and her lover Saleem were held guilty of hacking to death seven of her family, including her parents, her brothers, sister-in-law and 10-month-old nephew on 14 April 2008.

She was upset with her family for not accepting her relationship with a man who was less educated; Shabnam had post-graduate degrees in English and Geography while the man she wanted to marry, Saleem, was a school dropout.

Shabnam was pregnant when she was convicted. Taj was handed over to foster parents because children born to convicts cannot stay in jail beyond six years.

The UP government says Shabnam has exhausted all her legal options. Her mercy plea was rejected in 2016 by then President Pranab Mukherjee.