Why Hyderabad Rivals Bengaluru For Mantle Of India's Silicon Valley

Google's biggest office outside the U.S. is there, and Microsoft, Facebook, Deloitte, and Oracle-to name a few-have constructed sprawling campuses. Add a savvy government that's recently pledged $6.3 billion in the next three years to bolster infrastructure. 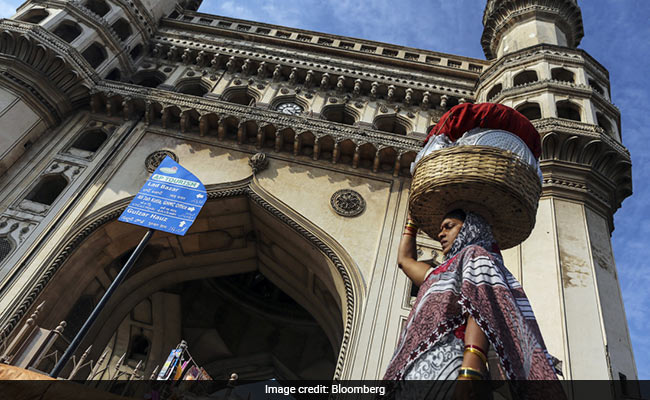 These days, if you're headed to India on business, it's likely that Hyderabad will feature prominently on your itinerary. The south Indian tech capital ranked first in a global study of the world's fastest-growing urban economies and real estate markets by professional services firm JLL-proving that Hyderabad's red-hot startup scene is only going to get hotter.

That should come as no surprise. Already, Google's biggest office outside the U.S. is there, and Microsoft, Facebook, Deloitte, and Oracle-to name a few-have constructed sprawling campuses. Add a savvy government that's recently pledged $6.3 billion in the next three years to bolster infrastructure and thereby support tech incubators and infrastructure, and you'll understand why Hyderabad now rivals Bangalore for the mantle of India's Silicon Valley.

All this makes for a city with two faces. What has historically been known as the City of Pearls-palaces and gardens whose erstwhile ruler, Nizam Mir Osman Ali Khan, was at one point the richest man on Earth-is being reinvigorated with new money. It means you'll find lavish resorts and hip hotels; royal-inspired traditional feasts; and exclusive restaurants hidden away behind velvet ropes. Here's how to navigate it all between your next slew of business meetings.

Getting around town can be a gridlocked nightmare, so prioritize these three areas. It'll be easier to see them next spring, when the first phase of Hyderabad's long-delayed metro is finally complete.

The city of Hyderabad was established along the banks of the Musi River by Muhammad Quli Qutub Shah in 1591 with the debut of a soaring, four-spired tower called the Charminar. To this day, it remains Hyderabad's defining landmark. Now it's also the anchor for Old City, which contains a clutch of historic attractions. There's the chaotic Lad Bazaar, where brides (and tourists) bargain for the city's famed lacquer bangles; the Mecca Masjid, one of the largest mosques in India, with space for 10,000 worshippers; and Chowmahalla Palace, a museum complex of four immaculately restored royal residences, full of intricate stucco work and Belgian chandeliers. (At the latter, don't miss the former Nizam's collection of vintage cars, including a canary yellow 1912 Rolls-Royce Silver Ghost.)

For much of the latter half of the 20th century, the long, winding roads of Banjara and Jubilee Hills-two adjacent and intertwined neighborhoods-laid claim to some of Hyderabad's top real estate. But only a smattering of the area's gracious mansions remain; many were torn down and replaced with apartment blocks and shopping malls. Today the numbered roads are choked with traffic, as Hyderabad's newly wealthy flit to and from the area's thriving designer ateliers and glitzy restaurants.

The newer reaches of town, which encompass areas such as Madhapur and Gachibowli, are known by all manner of tech-forward nicknames: Hitec City, Cyberabad. That makes perfect sense, considering these suburbs have seemingly sprung from the dust in the past two decades in response to the city's booming tech and corporate sectors. Here, you'll find everything from convention facilities to megamalls and outposts of major hotel brands-along with spinoffs of Hyderabad's most beloved boutiques and restaurants. In many ways, the area has become a microcosm of the city itself.

Taj Falaknuma Palace, the Nizam's onetime home, stands high atop a hill in Hyderabad's Old City and has hosted guests from Tsar Nicholas II to King George V. But after the 1950s, it fell into disrepair. Now, thanks to a restoration by Taj Hotels, guests ride up to the portico in a horse and carriage and get showered with rose petals at check-in. The hotel regularly schedules qawwali concerts-which focus on traditional Sufi hymns-in the palace gardens at twilight.

If that sounds like too much, try the Park Hyatt. Its prime location in ritzy Banjara Hills means you're a stone's throw from some of Hyderabad's best shopping and dining. But first you'll have to convince yourself to leave: The 185 high-tech guest rooms are among the city's biggest, with spacious granite baths, ample workspaces, and access to a locally beloved spa. And the halls double as a modern art gallery, featuring rotating works by contemporary talents such as Anuradha Thakur and Laxman Aelay.

Newest and buzziest is the ITC Kohenur, which debuted in super-central Hitec City in April with 271 jewel-toned rooms. Among the selling points? Vitamin C-infused showers and in-room iPads to summon your butler. The slate gray building, inspired by the millennia-old boulders that surround the city, has idyllic views over Durgam Cheruvu Lake from its rooftop bar-one of several leisure-friendly amenities in an otherwise business-minded hotel. But the real star is the airy lobby, where an eye-catching art installation made from Hyderabad's signature bangles is suspended from the ceiling. As for the name? It refers to a 105.6-carat diamond that was mined locally-and now features prominently in the British Crown Jewels.

Where To Eat And Drink

Dum Pukht Begum: Crystal chandeliers and sumptuous purple interiors feel right at home at the ITC Kohenur's flagship restaurant, which focuses on Hyderabad's royal traditions. On the menu, there's patthar gosht, paper-thin wisps of lamb cooked on a hot stone; baghare baigan, eggplant in a fiery coconut gravy; or the city's most emblematic dish, a variation on lamb biryani that stacks alternate layers of buttery rice and fragrant meat.

Concu Cucina: Usually, you want restaurants to stick to their lane. But when the team behind Hyderabad's cult patisserie Concu opened an Italian eatery last year, residents were open-minded-and it paid off. Concu Cucina serves some of the best Italian fare in town-zucchini and pepper bruschetta, meatball pizza, squid ink and baby lobster ravioli-with herbs sourced from its own garden.

Good Cow Cafe: Mumbai designer Masaba Gupta's quirky womenswear and store interiors are an Instagrammer's dream, with whimsical motifs and candy colors aplenty. The same is true of her new cafe, which spills out onto an open-air patio. Among the best dishes: raw papaya salad, paneer grilled in piri-piri sauce, and spicy chili-garlic prawns paired with green apple and hollandaise.

Shake Stir Muddle: A loyal clientele was lining up from opening day at this speakeasy-style cocktail bar and tapas lounge in Jubilee Hills, which is a sibling of local fine-dining mainstay Fusion 9. It's fast become a favorite among the Sunday brunch set-get the cheese-stuffed pani puri, a beloved Indian street food snack gone upscale.

Pudding And Mink: This members-only lair, accessible with a special code number, professes to be the world's first ayurvedic cocktail bar, asking guests to fill out questionnaires so that the mixologist can learn about their doshas (or energy profiles) and prescribe a potion accordingly. The interiors are almost as big a draw as the drinks: Think sultry red banquettes, walls clad in patterned scarlet velour, and a massive mirrored skull by Goa-based artist Yahel Chirinian.

Autumn Leaf Cafe: A furniture store might not be your idea of a hangout, but this lovely Jubilee Hills bungalow holds a surprise around every corner, including a garden cafe that's the perfect place to retreat with a book and a cup of Assam masala. Check the Facebook page ahead of your visit-you might be able to catch one of the spot's many literary events or live concerts.

(Except for the headline, this story has not been edited by NDTV staff and is published from a syndicated feed.)
Comments
HyderabadOld City HyderabadJLL Hyderabad Report