4 Puppies Burnt Alive In Front Of Helpless Mother In Hyderabad

The puppies were set on fire while their mother watched helplessly, howling, and attempting to save her newborns. She was later seen crying near the dead puppies. 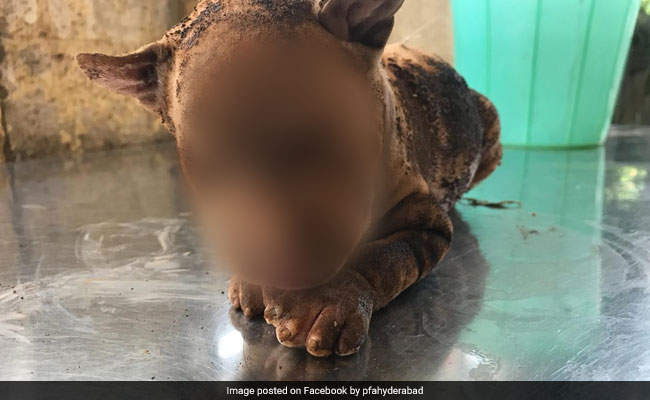 One of the four puppies set on fire was rescued and taken to the vet, but died later in the evening

In a horrific instance of cruelty, four puppies near Hyderabad were burnt alive on Saturday. It is not known who, or how many people set the puppies on fire. The police are examining CCTV footage of the area to find out who is responsible for carrying out such an inhuman act.

The puppies were set on fire while their mother watched helplessly, howling, and attempting to save her newborns. She was later seen crying near the dead puppies.

Photos and videos of the deplorable incident were soon shared on social media and instant messaging platforms, and triggered public outrage. Locals in the area alerted an animal rights group nearby, who sent a community animal protector to the place of the incident.

When the protector reached the area, he saw one of the pups still alive. He rushed to save it. While three puppies had already died, he managed to rescue the fourth and provide some urgent medication. He then took the puppy to the vet.

The puppy however, died later that evening at a veterinary clinic.

The 'People For Animals' activist then registered a police case under the Prevention of Cruelty Act and under the Indian Penal Code, following which the police began an investigation and started examining the CCTV footage in the area.

Several acts of cruelty against animals have been highlighted recent years.

In a similar incident two years ago, newborn pups were burnt alive in a different neighbourhood in Hyderabad. A few children, in their teens, tied the pups together and lit a bonfire around them. The incident, which happened in July 2016, was filmed. The boys were arrested later.

In Chennai too, in 2017, a heart-wrenching video of a dog being strangled was posted on Facebook. The year previous to that, two medical college students near Chennai filmed themselves throwing a dog from the terrace of a building.

Baby Electrocuted Inside Incubator After Fire At Hospital In Hyderabad