This 'Double Decker Death Wish Burger' Is So Spicy, You Have To Sign A Waiver Before Ordering It! 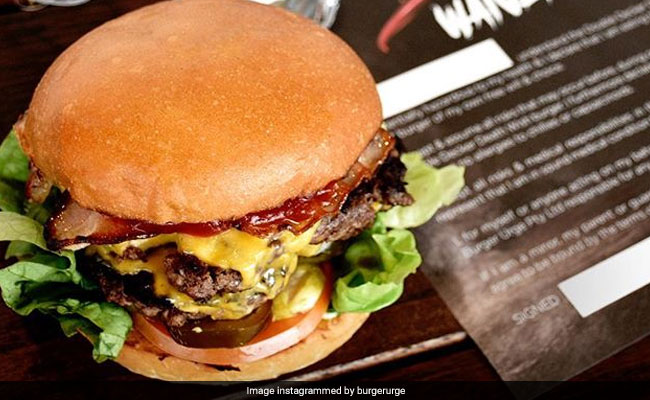 Thought you could handle extremely spicy food? Think again! A burger restaurant in Australia is daring it customers to eat the spiciest item on their menu - a burger called, The Double Decker Death Wish. But, there's a catch. You can only sample this burger if you sign a health waiver, stating that the eater is 'aware that the Double Decker Death Wish is potentially hazardous' to her/his health! So, before you can even order this burger, the restaurant makes you sign this document, which in itself is a testament to the spiciness of this dish. The burger has been making headlines around the world ever since the restaurant announced its launch in July 2018. But, the warnings and the waiver have not managed to deter spice lovers from taking up this extreme challenge and the restaurant even stated that the burger was sold out in several of its outlets!

"Burger Urge is proud to present Australia's hottest burger," said an Instagram post on the restaurant's handle. It goes on to elaborate on what goes into making this 'potentially hazardous' burger: "Two angus beef patties, maple bacon, cheese, pickles, jalapenos, tomato and lettuce with GHOST CHILLI SAUCE." The restaurant warned its customers, "You must sign a waiver to eat this burger. Goggles and gloves will be provided!" So, how has the reaction been? Some people, who love a good spice burn, are loving the burger and devouring it with apparent ease. But, most others are left gasping for air and require litres of water to soothe their tongues and burning throats after eating the burger. The number of people in the second category far outnumbered those in the first category.

According to the restaurant, all but every fourth attempt at demolishing the burger didn't end up with the customer melting away in a pool of tears and sweat! The secret behind the devastating spiciness of the burger lies in its ghost chilli sauce, which the restaurant prides itself for. The sauce brings together the heat of some of the spiciest chili peppers in the world, including the bhut jolokia, which measures between 855,000 Scoville heat units to an unbelievable 1,041,427 SHU! Well, all we can say is that we can't wait for the Double Decker Death Wish to come to our very own land of spices and spice-lovers - India!