Your Honor Review: Mita Vashisht is brilliant. Varun Badola stands tall in the guise of a family man forced by circumstances to stoop low. 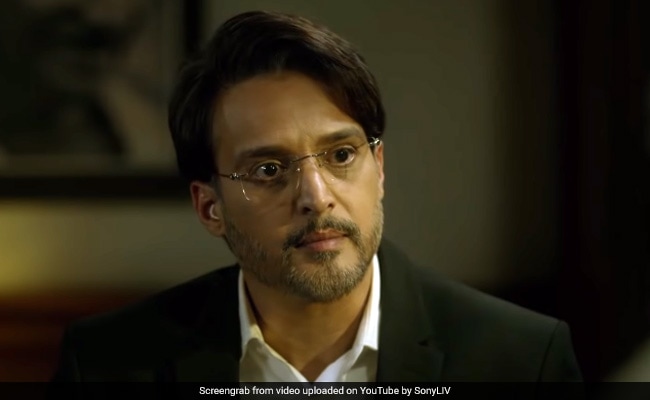 Your Honor, an absorbing 12-episode SonyLIV original, sticks with the title and, to a certain extent, the tone of the Israeli series it has been adapted from. Writer Ishan Trivedi and director E. Niwas transport the story to Ludhiana and locate the action within the context of a them-and-us linguistic divide in the underworld.

The spaces in which the series unfolds - courtrooms, a judge's residence, a police station, the interiors of a district jail, a CRPF colony, a college campus and the streets, neighbourhoods (from posh Civil Lines to unkempt Gandi Chhapri) and other nooks and peripheral expanses of Punjab's largest city and its environs - impart a distinct feel to this incisive indigenised version of a universal story of power, privilege and manipulation.

The protagonist is a respected judge who wades into a quagmire in an attempt to save his only son from the law - and the underworld - after a hit-and-run case sends a dreaded criminal to hospital with life-threatening head wounds. The incident sparks fears of a gang war and puts the city cops on high alert.

Each taut episode of Your Honor lasts roughly 35 minutes. The gripping narrative tosses one way, then another, and then yet another with sustained momentum while holding on to its equilibrium. The judge and his motherless son are the key characters. As the screws steadily tighten on the duo, a slow-burning ethical and emotional tussle unfolds between the man and the asthmatic boy.

Sessions court judge Bishan Khosla (Jimmy Sheirgill) knows the law inside out. His wily ways are posited as a contrast to the wide-eyed earnestness of his one-time protegee Ruma Pathak (Parul Gulati), who is only three months into the profession and is still in search of her first independent case. The legal greenhorn plays by the book even when she has reason to suspect that all isn't fair and that her mentor isn't averse to using her to cover his tracks.

On the face of it, Khosla is an idealistic, upright man. In an early sequence, he delivers a stay order on the demolition of a colony of migrants. But later in the story, by which point he has gone too far down the road that leads him away from his principles, he tells Ruma that "there are no angels in this story". He isn't wrong.

Neither Ruma nor Indu (Richa Pallod), exasperated wife of a CRPF man who does the judge's bidding for reasons the woman cannot comprehend, is left unscathed by the steady erosion of truth and ideals. They certainly aren't to blame for what is going on, but they are inevitably sucked in.

But no matter what, they can never be like Kiran Sekhon (Mita Vashisht), a cynical senior police inspector who goes sniffing around for her pound of flesh. She has seen enough of this world not to be taken by surprise. She plays along, holds her own and, when matters spiral out of control, does not shy away from getting her hands dirty.

At the other end of the moral spectrum, the judge's teenage son, Abeer (Pulkit Makol) seeks solace in the words of his chain-smoking maternal grandmother Sheel Tandon (Suhasini Mulay), a retired judge who has nothing but contempt for her son-in-law, and in the company of his college sports teacher Amrita Singh (Taniya Kalra).

In a drunken state, Abeer complains to the latter that his father "does not care a damn about what I feel". Not that Judge Khosla has any empathy for Kashi Samthar (Varun Badola) either. The latter, a CRPF deputy commandant who is beholden to the judge for all the help he has received from him in life, lives in his official quarters with his pregnant wife Indu and his two school-going sons.

Kashi is drawn inescapably into the conspiracy hatched by Judge Khosla. Its success hinges on making a fall guy out of an 18-year old car thief Shashi Tiwari alias Guddan (Parag Gupta) and ensuring that he does not spill the beans in police custody.

The competing narrative strands and character arcs serve the purpose of probing the nature of justice, the process of law enforcement, the dynamics of policing, and social fissures in a city carved up between two gangs, one of Punjabi-speaking locals, the other of Poorvanchali migrants.

The judge, who is in line for a promotion to the high court, panics when he learns that the victim of the accident caused by his son (who, to make matters worse, was at the wheels of the car without a licence) is the first-born of an imprisoned but dreaded crime lord, Satbir Mudki (Mahabir Bhullar) of what is known as the Pathankotiya gang.

The latter's hotheaded son Harnam (Kunj Anand) is on the loose. It isn't just the police that is on tenterhooks, but also Pandit (Yashpal Sharma), the chief of the rival gang. From here on, every move that Judge Khosla makes and every lie that he resorts is a body blow on the values that he is forsworn to uphold.

His repeated violation of the line of acceptable behaviour happens amid a raging gang war between a homegrown crime syndicate and a mafia outfit manned by men referred to in police circles and in the underworld as bhaiyyas. Tensions between the two groups intensify when the accident on a secluded stretch of the highway is seen as attempted murder.

The first eight episodes of Your Honor are intense and intriguing. For an hour after that, much of which is devoted to the two gangs out to settle scores, the pace somewhat slackens. But in the final act, the series regains urgency.

Jimmy Sheirgill powers Your Honor, steering the pivotal character with utmost control. He delineates the moral contradictions of the man without having to overstrain himself even a wee bit. Mita Vashisht is brilliant as the simmering, sniggering, stonewalling police officer with an acute sense of self-preservation. Varun Badola stands tall in the guise of a family man who prides himself on working for the nation but is forced by circumstances to stoop low.

But nobody in the cast makes as emphatic an impression as Parul Gulati. Playing a tenderfoot in a world where men walk roughshod, she fleshes out with confidence and conviction a woman worth rooting for.

The verdict: Your Honor is gripping. It is a marathon but it does not weigh heavy.