Yaara Movie Review: Vidyut Jammwal's Action Film Has Its Moments - But Too Few And Far Apart 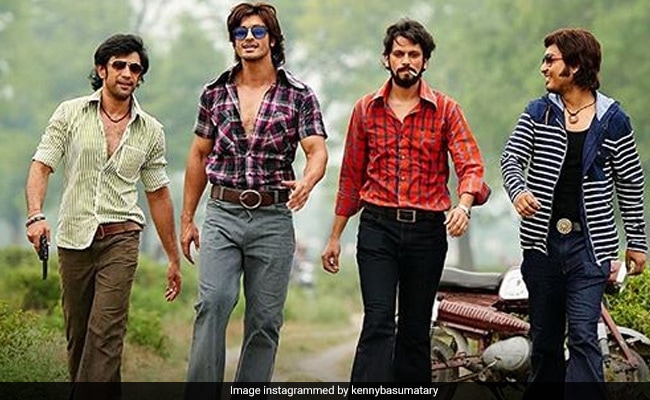 A beefy Vidyut Jammwal and a brooding Amit Sadh, playing the two male leads, are called upon to put in the hard yards in a film that never quite gets off the ground. Written and directed by Tigmanshu Dhulia, Yaara straddles five decades - from the early 1950s to the late 1990s - and yet seems caught in a time warp.

The blotchy action film would have us believe that it is an epic saga. Despite all its surface flourish and expansive historical allusions, it is trapped in a constricted bandwidth. The core of the film is exasperatingly hollow. In the bargain, the end result falls short of matching the overt ambition of the enterprise.

Yaara banks on numerous Hindi cinema cross-references and stray mentions of socio-political developments to mark out the different eras in the life of the film's five principal characters - four outlaws who stick together through thick and thin (until the law catches up and comes down heavily on them) and the girlfriend/wife of one of the guys.

The first quarter of the 130-minute film is fuzzy, frenetic and utterly befuddling. It makes way for a stretch where the plotting becomes somewhat clearer and steadier, allowing the characters to come into their own and lend the storyline certain recognizable contours. You figure out that this is a tale of friendship and rebellion, honour and betrayal, redemption and retribution involving defiant misfits who have the odds loaded against them and can hope to survive only if they keep fighting.

The main actors - Jammwal, Sadh, Shruti Haasan, Vijay Varma and Kenny Basumatary - flail about aimlessly as the patchy screenplay allows no leeway for proper channeling of their energies. The haphazard editing does not help matters. None of actors, barring Jammwal to a certain extent, is allowed to settle into a stable rhythm. There are a couple of scenes where one might just detect flashes of Sarika in Shruti Haasan. Unfortunately, her character arc is disappointingly inconsistent.

Jammwal, cast as gang leader Phagun Gadoliya, corners most of the big action scenes. As is his wont, he revels in them. Amit Sadh plays the temperamental Mubarak "Mitwa" Shahariya. The bonding between the two boys goes back all the way to a village near Jaisalmer. They are forced to take to a life of crime well before they step into their teens. A gangster Chaman (Sanjay Mishra in a cameo) sees potential in the boys when he spots them on a bus evading the police after avenging the killing of a near one.

The other two major male roles are essayed by Vijay Varma, whose gait is supposed to be reminiscent of the 1970s Bachchan swagger (tall order that!), and Assamese actor-director Kenny Basumatary, who is pigeonholed into playing a man from Nepal. Both hit dead-ends despite their best efforts.

Yaara, a remake of the 2011 French drama Les Lyonnais (A Gang Story), is a sprawling crime film that takes into its sweep the shifting times and the impact that has on the camaraderie of the protagonists who have known each other since they were boys. Somewhere down the line, thanks to the persuasion of a bureaucrat's daughter, Sukanya (Haasan), for whom Phagun develops a soft spot, they get involved with a leftist rebel outfit.

The move proves costly. The boys fall foul of the state. They end up in jail. The prison terms tear them apart and they lose touch with each other even as Sukanya, who, too, suffers grievously at the hands of the law and its enforcers, renews her contact with Phagun.

When they complete their prison terms, three of them - Phagun, Rizwan (Varma) and Bahadur (Basumatary) reunite and decide to clean up their act. The fourth friend, Mitwa, vanishes into the blue. A decade later, he resurfaces in Delhi, where the others are now comfortably ensconced.

Mitwa's return triggers a new crisis for the quartet as an international criminal based in Bucharest and a CBI official Jasjeet Singh (Mohammad Ali Shah, who makes a strong impression) are determined to nab the prodigal friend and punish him for transgressions that the others aren't aware of. Their bond is stretched to snapping point as tragedies pile up and loyalties are called into question.

Occasional signposts of India's journey from a newly-independent nation-state to a post-liberalization economy pop up along the way as the gang that smuggles arms and illicit liquor on the country's border with Nepal grapples with the vagaries of an unsettled, risk-filled existence.

Portraits of Jayaprakash Narayan on walls in Patna (where the gang pulls off a bank heist and hopes to blame the Naxalites for the crime) or a photograph of Mao Zedong in a Delhi college students' union room indicate that the action is unfolding in the mid-1970s. Additionally, A massacre by upper-caste men in a village in Jehanabad is mentioned as young leftist militants gear up for action. There is tumult all around - rising unemployment, caste tensions, government corruption and police atrocities.

A large chunk of the story takes place in the 1970s before the film jumps to 1997. In fact, Yaara opens in the late 1990s with the return of Mitwa to Delhi, which sets off a chain of events that tests Phagun and Sukanya's marriage, and then moves back and forth through the decades. The early portions of Yaara recall 1970s Mumbai potboilers, but the look and feel of the rest of the film tend to be erratic.

Yaara has its moments, but they are simply too few and far between to make an impact and change the course of the film. This outing has no chance of being ranked among Dhulia's best works. It is far too wayward to sustain audience interest all the way through.