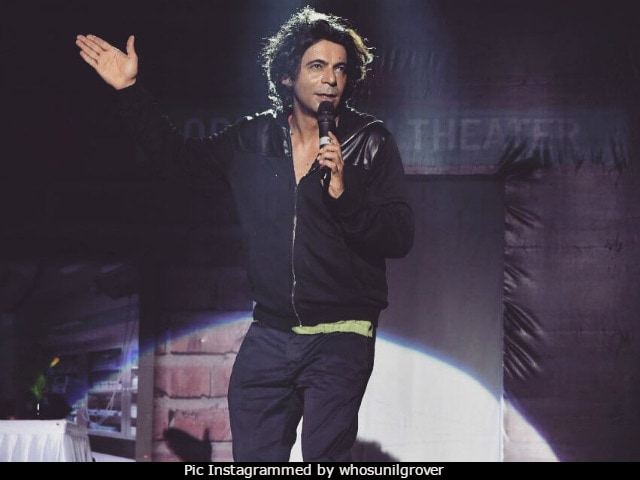 New Delhi: Sunil Grover is reportedly all set with the game plan of his new yet-untitled new show - there has been no official announcement yet. The comedian is expected to take a new slot on Sony Entertainment Television, which has stalled airing fresh episodes of The Kapil Sharma Show. The The Drama Company continues to hold a prime slot on the channel that'll be taken up by dance reality show Super Dancer September 30 onwards. The Drama Company was headlined by Kapil Sharma's rival Krushna Abhishek and had a contract with Sony for only a series of episodes. Sunil Grover's new show is expected to premiere by next month and has also reportedly begun shooting. This new development also points to the possibility that Kapil is not returning with his show in October.

Now, a Times Of India report states that the cast of Sunil Grover's show has swelled up with Kiku Sharda, Ali Asgar and Sugandha Misra joining in. If you remember, Ali Asgar had quit Kapil's show citing creative differences and the ugly spat between Sunil Grover and Kapil Sharma, which was also why Sugandha walked out of Kapil's comedy series. Ali Asgar made a quick exit from The Kapil Sharma Show to co-star with Krushna on The Drama Company. After Kapil's show was taken off-air, Kiku Sharda, who continued his tryst with Kapil Sharma, collaborated with veteran comedian Johnny Lever for his new sitcom Partner.

Speculation assigns part of Kapil Sharma's downfall to the creative head of his show - Rajiv Dhingra. The Times Of India report states, The Kapil Sharma Show regulars will not be interested for yet another collaboration as long as Mr Dhingra headlines the team. "Kapil's friends (actors) who have worked with him and stood by him during thick and thin still love him. But they don't want to be associated with Kapil till the time creative control of the show is in the hands of Rajiv Dhingra," the report quoted a source as saying.

Promoted
Listen to the latest songs, only on JioSaavn.com
Earlier, Hindustan Times reported that with The Drama Company coming to an end, the channel is looking forward to fill the empty slot - probably with Sunil's new show. "Sunil is working on a show and negotiations are on with the channel," a source had told Hindustan Times.

Both the reputation of Kapil Sharma and his show went for a toss following his fight with former colleague Sunil Grover. Kapil was allegedly inebriated during a flight back from Melbourne and assaulted and abused Sunil during a mid-air altercation. Last heard, Kapil was recuperating from weakness due to stress induced by the falling TRPs of his show.