For those who don't know, Sunil Dutt and Shabana Azmi worked together in the 1984 film Yaadon Ki Zanjeer 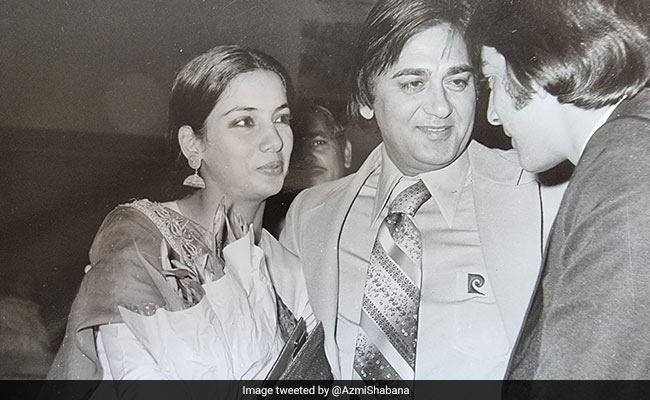 Shabana Azmi, on Sunday, shared a throwback photo from the time when she first met Sanjay Dutt. Sanjay Dutt's late father and filmmaker Sunil Dutt had introduced him to Shabana Azmi. For those who don't know, Sunil Dutt and Shabana Azmi worked together in the 1984 film Yaadon Ki Zanjeer. Sharing the black and white photo on Twitter, Shabana Azmi revealed that it was clicked by Sunil Dutt's daughter and politician Priya Dutt. "Being introduced to a young #Sanjay Dutt by his father Sunil Dutt Saheb. Photo courtesy Priya Dutt," Shabana Azmi wrote in the caption. She can be seen holding a bouquet in one hand and shaking hands with Sanjay Dutt.

Sunil Dutt died of heart attack at the age of 75 at his Bandra home on May 25, 2005, one year before Sanjay Dutt completed his jail term for illegally possessing arms. Sunil Dutt was married to actress Nargis.

Shabana Azmi has worked in over 100 films and has won five National Awards in her acting career. The actress, who is also a renowned theatre artiste, made her film debut with the 1974 movie Ankur, for which she won her first National Award for the Best Actress. She has featured in critically-acclaimed films like Arth, Bhavna, Neerja, Khandar, Masoom, Paar, Tehzeeb, Godmother, Fire and Sati among many others. She has also been honoured with the Padma Shri and Rajiv Gandhi Award.