Vivek (Reason) Review: This Documentary Is Aimed At Pricking The Conscience Of All Indians

The film - Vivek is more than just an activist film; it is an essential, urgent history lesson that we can ignore only at our own peril. 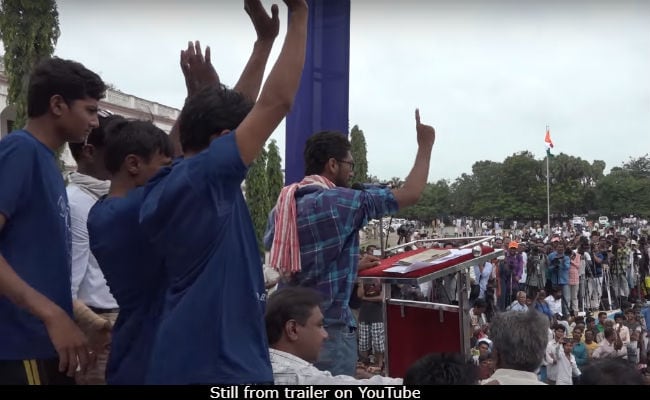 Far and away the most important Indian title among the world premieres that the programmers assembled for the 43rd Toronto International Film Festival, veteran documentarian Anand Patwardhan's four-hour-and-twenty-minute Vivek (English title: Reason) is an unflinching probe into the innards of the Hindutva factory that thrives on fanning religious exclusion and casteist prejudices while propping up the feudal, anti-egalitarian principles spawned by Brahmanism.

The film - Vivek is more than just an activist film; it is an essential, urgent history lesson that we can ignore only at our own peril - gets down and dirty as it boldly wrestles with the huge challenges posed, and the unsettling questions triggered, by the steady downward spiral that the world's largest democracy has been pushed into by a government that looks the other way - if not gloat gleefully and openly - when marauding cow vigilantes go on a killing spree in the name of Hindu assertion. The film, as illuminating as it is disturbing, combines the gravitas and rigour of a hard-nosed chronicler with the resolute spirit of a streetfighter to deliver a chilling portrait of contemporary India.

Patwardhan, as is his wont, pulls no punches in this eight-chapter cinematic essay. The film is backed by extensive research into the genesis of a fascist philosophy that draws sustenance from militant majoritarian goals and a climate of fear for anybody (be they individuals, groups or communities) who dares to stand up and be counted. The film simultaneously shines a light on the courageous resistance against Brahmanism from those that are most affected - Dalits, Muslims, students and human rights activists - and points towards the grave threats to life and limb that these people face in the bargain.

Right at the outset, the film shows us the nature of the risks involved in this fight for the preservation of the soul of a secular, inclusive India. From the daylight murders of rationalist Narendra Dabholkar, leftist activist Govind Pansare and scholar M.M. Kalburgi to the fate of Dalit research student Rohith Vemula and the killing of fearless journalist Gauri Lankesh, the film traverses a wide arc, bringing into its sweep the steady marginalization of Dalits and Muslims, the Malegaon blasts and the fallout of the investigations, the growing clout of the Goa-based Sanatan Sanstha, and the mounting unrest on campuses across the country (including Hyderabad Central University, Jawaharlal Nehru University, Film and Television Institute of India, Allahabad University, Delhi University), among other things.

A placard displayed by a protesting FTII student falls back on Voltaire to sum up the mood of the times: "It is dangerous to be right when the government is wrong." But it definitely isn't merely the developments of the last four years that Vivek covers; it dwells upon Indian history spanning well over a century to understand where the Hindutva ideology's hatred for the other has sprung from and the course that the resistance to it has taken not only over the decades but also in the present times. "Today's Brahminism," says the voiceover, "is draped in the national flag. Its storm-troopers draw from the very classes that it has rendered jobless."

Patwardhan himself provides the film's voiceover linking the various strands of the cautionary tale that begins with 'Slaying of the Demons', and courses through seven segments titled 'Reclaiming Shivaji', 'Legacy', 'Sanatan Religion', 'In the Name of Cow', 'Fighting to Learn, Learning to Fight', 'Terror and Stories of Terror' and 'Fathering the Hindu Nation' before ending with an Epilogue.

This film is a sprawling epic call-to-action aimed at pricking the conscience of all Indians. The question is: will the censors let the film travel unhindered among the people of the nation, people whose future is at stake as the ideologues and foot soldiers of Hindutva run riot under the benign gaze of a ruling establishment foresworn to tearing the social fabric of India to shreds?

Vivek may not alter the way Hindutva votaries think, nor perhaps the way Indians in general will vote in the next Lok Sabha elections, but what it certainly does is show us the ugliness of the cesspool that is Hindutva - a political philosophy that was opposed to India's freedom struggle but now wants to usurp the hard-earned independence of a magnificently diverse nation and impose upon it upper-caste Hindu uniformity.

While dissecting the venomous right-wing attitudes towards Chhatrapati Shivaji, Mahatma Gandhi and Babasaheb Ambedkar, Patwardhan weaves into the film's narrative the various flashpoints that have shaken India since Narendra Modi came to power with an absolute majority.

Probably the most touching moment comes late into this remarkable documentary film. Mohammad Sartaj of the Indian Air Force, son of Mohammad Akhlaq, the Dadri ironsmith who was lynched by cow vigilantes on suspicion of possessing beef setting off many copycat attacks, says: "There is no country like India. I'm lucky to be born here."

He, of course, goes on to add that some elements are seeking to poison the atmosphere for reasons that he understandably refuses to delve into. But don't we all know what drives the Hindutva project? The ideas unabashedly trotted out by the leaders as well as the rank and file of the "Hindu Nazi" outfits would be dismissed as outright moronic had they not been such a grave threat to the pluralism that defines the India we know.

Inevitably and justifiably, Vivek throws punches at the media and its shameless, pernicious kowtowing to the wielders of power. Nothing in the film is funnier - and more shocking - than footage of a TV news anchor who is notorious for his shrill, unbridled manner of grilling his guests thundering at a JNU student who has been conveniently branded an anti-national and yet invited to a show about a martyred Indian army man: "You will not speak over me. I've run out of patience with your shallow and half-literate arguments." Has any assertion made on Indian television ever been more ironic?

Sorrow, anger, shock, horror, bewilderment and disbelief: Vivek arouses varied emotions as it runs its course. But the clarity and precision that Patwardhan brings to bear upon the construction of his over-arching plea for sanity makes the film essential viewing for anybody who has a stake in the future of India.