"The director kept insisting that he wants to talk to me and that we should go to the room," said Vidya Balan 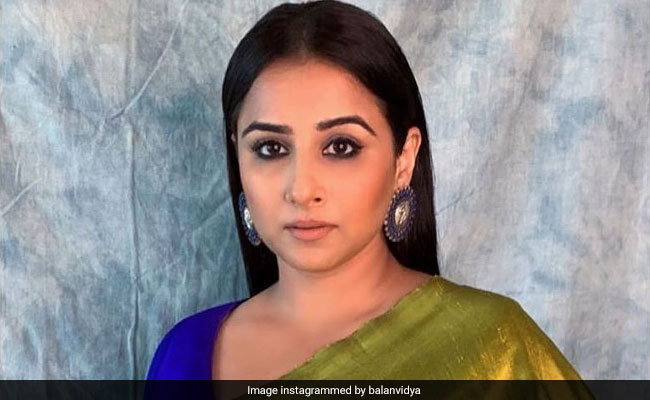 Actress Vidya Balan has revealed horrifying experiences with producers down South, one of whom insisted they meet in a hotel room rather than in a public space; another allegedly dropped her from a film because she didn't 'look like a heroine.' Ms Balan, 40, has been vocal about being body-shamed in the past. Speaking to Pinkvilla, the actress spoke at length about struggling to find a foothold in the Tamil film industry after starring in late Nineties TV show Hum Paanch. By her own account, the years between Hum Paanch and her big screen debut in Bengali film Bhalo Theko in 2003 were traumatising and fraught with rejections, leaving Vidya Balan feeling 'ugly.'

A producer in Chennai made a hasty exit when Vidya Balan refused to close the door of the hotel room they were meeting in, the actress told Pinkvilla. "One day I remember I was in Chennai and this director came to meet me. I said let's sit in the coffee shop and he kept insisting that he wants to talk to me and that we should go to the room. I left the door of my room open and he left within five minutes. This incident suddenly struck me today when I'm talking about this," said Ms Balan, who just had a big hit in Mission Mangal.

Another producer served up a humiliating excuse for replacing her in his film. "There was a Tamil film I was doing and I was thrown out of the film...I remember my parents had come with me because they were so worried about me...I had really begun to fade so both my parents flew to Chennai with me and we went to the producer's office. The producer showed us the clippings from the film and he said 'just look at her does she look like a heroine. He said 'I was not in favour of taking her at all, it was the director who insisted," Vidya Balan said.

It left Vidya Balan with low self-esteem. "I felt ugly. I felt like shit for months and I don't think I looked at myself in the mirror. I didn't like what I saw because I thought I was ugly. For the longest time I had not forgiven that man but today, thanks to that I realized that I have to love and accept myself the way I am," she told Pinkvilla.

Then there was the time Ms Balan was hit with a legal notice after quitting a Tamil film a day of filming later because she was uncomfortable with the content.

Luckily, in the best filmy tradition, there was the happiest of endings to this litany of horrors. In 2005, Vidya Balan broke into Bollywood with Parineeta. Her impressive resume since then includes credits such as Lage Raho Munna Bhai, Paa, Ishqiya, No One Killed Jessica, Kahaani and her National Award-winning performance in The Dirty Picture.

Speaking at the book launch event of journalist and documentary filmmaker Minnie Vaid in Mumbai recently, Vidya Balan shared a message for struggling actors and said: "I think no opportunity should be big enough for you to compromise on your safety. There's a lot of work out there. If you are good and believe in yourself, I think nothing is impossible. Don't give into people who use this as a bait," reported PTI.