The Old Guard Review: Charlize Theron Is In Fine Fettle In Spin On Superhero Genre

The Old Guard Review: The eternal female warrior who spearheads the five-member army is one of a kind - a timeless superhero who is so good at her job that she can admit that she is tired of saving mankind without facing the risk of being believed. 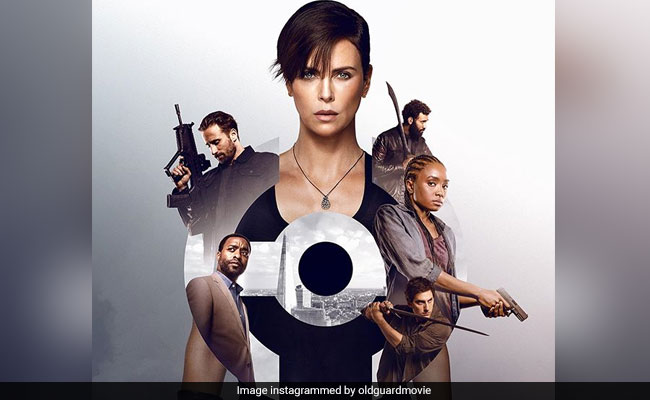 The Old Guard: Charlize Theron in the film. (courtesy oldguardmovie)

It is hard being immortal, Andromache the Scythian (Charlize Theron), known to her army simply as Andy, owns up when her newest find, young US Marine Nile Freeman (KiKi Layne), asserts that "there isn't one good thing in this". The young soldier is talking about living forever, a power that the protagonists of The Old Guard possess. The movie itself has more than one good thing. Charlize Theron and Layne, singly and in tandem, are definitely among them.

The eternal female warrior who spearheads the five-member army in The Old Guard, a movie streaming on Netflix, is one of a kind - a timeless superhero who is so good at her job that she can admit that she is tired of saving mankind without facing the risk of being believed. Such is the delectable irony of this invincible warrior's occasional stabs at self-effacing scepticism that it only makes the otherwise indomitable figure all the more fascinating. Adapted for the screen by Greg Rucka from his own graphic novel series of the same name, The Old Guard imparts a refreshingly new spin on the genre, eschewing CGI-heavy action in favour of an emotionally charged adventure drama involving a small band of undying soldiers who do their share of blood-splattering as they fight to protect the secret of their powers from being put on sale by a pharmaceutical company.

The undying fighters have secretly protected mankind since time immemorial but they are now themselves face a massive risk posed by the greedy head of a pharma firm, Steven Merrick (Harry Melling) who, with help from CIA agent James Copley (Chiwetel Ejiofor), hatches a conspiracy to steal the genetic code of the immortal soldiers "to push scientific frontiers and make a little profit."

The Old Guard, directed with impressive panache by Gina Prince-Bythewood, is wonderfully light on its feet. Its pace is blistering but when it slows down once in a while to let the characters give vent to their long-festering angst, it loses no steam. No mean feat that.

The adventures of Andy and her team are inevitably violent. They are shot at and wounded, and they hurt and groan, but live does not ebb out of them because they heal almost instantaneously and are back on their feet to take down their adversaries. But, as Andy reminds us repeatedly, survival against all odds is a burden that isn't always easy to carry. Booker (Belgian actor Matthias Schoenaerts), who died fighting in Napoleon's army before discovering the power of immortality, says to Nile: "Just because we stop living doesn't mean we stop hurting."

Grief and pain have kept them company for centuries. Booker reminds Nile that living forever also means having to lose your loved ones who have finite lives. He recalls that his own youngest son, one of three boys that he fathered, died of cancer aged 42. Tears well up in Booker's eyes as he recalls the untimely death and The Old Guard ceases to be just another flick about invincible warriors who fear neither death nor disease.

Yes, this is an unusual kettle of fish. The fighters here aren't an unwavering, swaggering lot who go about their jobs without ever being confronted with questions whose answers elude them. In fact, all of them, especially Andy, who has been at it since the birth of humanity, are acutely aware that one day their immortality will end. There will come a time when they will stop healing but they do not know when and how.

Charlize Theron is in fine fettle as the leader of the pack, a formidable woman who knows that what time steals isn't as important as what time leaves behind in the form of memories. Not that she is able to recall when it all began for her but she is wracked by guilt for letting one of her oldest aides perish before her eyes. The past, no matter how distant it may be, does weigh on her, just as it does on the others who fight by her side.

KiKi Layne (from Barry Jenkins' If Beale Street Could Talk). in the guise of a new immortal who negotiates a steep learning curve as she seeks to ease herself into the mysterious group, is, to put in a single word, fabulous. The process of initiation and gradual acceptance that she undergoes creates the potential for sequels in which she could well step into Andy's role as the boss of the immortals.

For the moment, of course, Andy is the undisputed boss because she is the oldest, having been joined by Joe (Lebanese-Dutch Marwan Kenzari) and Nicky (Italian Luca Marinelli) during the Crusades (when the two men killed each other and then went on to become lovers down the ages). She has to deal with a certain weariness. "The world isn't getting any better. It's getting worse. The world may burn for all I care. I'm done," she asserts after a mission that they are roped into turns out to be a set-up.

At the other end of the spectrum is Corporal Nile Freeman, who must now turn her back on the US Army as well as on her mom and brother, is understandably sceptical at first when her ability to defy death by accident during a field skirmish in Afghanistan. But as she begins to get into the swing of things, she exudes the sort of youthful confidence that excites Andy no end. Yet, bouts of diffidence never stop assailing her.

The struggles of the two women have an interiority that is not of a piece with action film. The Old Guard does brim with violent confrontations and gunfights but one thing that it isn't is run-of-the-mill.

The primary focus of The Old Guard is on friendship, loneliness and their "resistance to capture" because none of them wants to spend "an eternity in a cage". Andy has fought thousands of battles alongside fellow immortals and the advent of a new soldier in their ranks after a gap of two centuries is cause for cheer.

The greatest joy of watching The Old Guard lies not only in the fact that it never ceases to be entertaining but also equally in the emphatic manner in which the movie demonstrates that a superhero actioner need not be a clone of a studio tentpole. The Old Guard has a sparkling, all-new feel.