The Matrix Resurrections Trailer: Keanu Reeves Goes "Back To Where It All Started", Priyanka Chopra's Intriguing Glimpse

The Matrix Resurrections Trailer: In a scene, Priyanka Chopra, who can be seen reading the book Alice In Wonderland: Through The Looking Glass 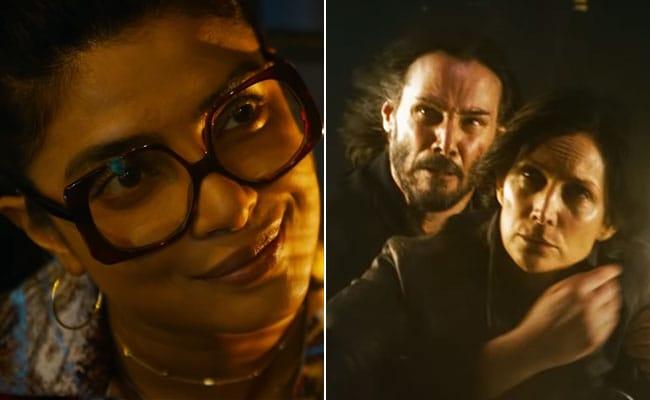 The Matrix Resurrections is here and that's the reality, no confusion there. Keanu Reeves and Carrie-Anne Moss return as Neo and Trinity in the fourth instalment on the Matrix series, which introduced us to a world of parallel realities in 1999. The Matrix Reusrrection trailer begins with a long haired Neo telling his therapist - Neil Patrick Harris - "I have dreams that are not just dreams" - and what follows are flashbacks. Neo is shown to be taking the blue pills, which help him stay in his current reality, till the arrival of Yahya Abdul-Mateen II, who hands Neo the red pill and says: "Time to fly." Needless to say Neo's reality is turned upside down, yet again, as he is back to square one, in the Matrix.

In the last scene of The Matrix Resurrection trailer, Jonathan Groff tells Neo: "After all these years, to be going back to where it all started... back to the Matrix." Throughout the trailer, Neo can be seen chasing the "truth" in search for his reality. "If you want the truth, you're going to have to follow me," says actress Jessica Henwick, who appears to be playing a mercenary in the film. "The only thing that matters to you is still here. I know why you're fighting," Neo is told by Yahya Abdul-Mateen II, as scenes of Neo reuniting with Trinity flash on screen.

The Matrix Resurrection trailer also has a blink and miss appearance by actress Priyanka Chopra, who can be seen reading the book Alice In Wonderland: Through The Looking Glass, a literary reference to the film's theme about alternate realities.

Watch the trailer of The Matrix Resurrections here. Can you spot Priyanka Chopra?

Priyanka Chopra Describes Her Role In The Matrix Resurrections: "A Small Fish In The Pond"