"How Much Very Much Pagal" Are Madhuri Dixit And Terence Lewis? This Much 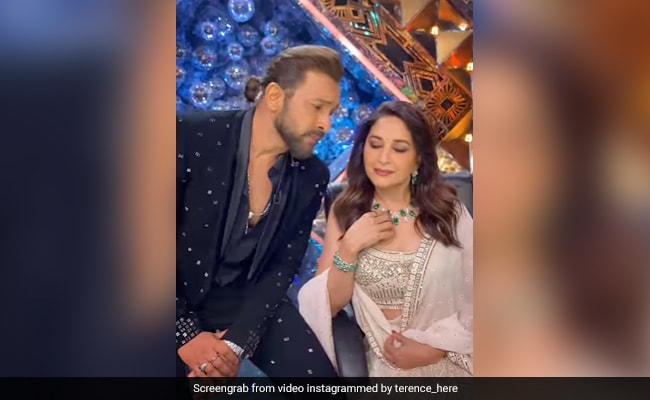 Madhuri Dixit and Terence Lewis are too much fun together. Wondering what is about? Let's simplify it for you. The duo, who appeared as co-judges on Jhalak Dikhhla Jaa Season 10this week, made our day by sharing a ROFL clip. It is their take on trending Manoj Kumar and Sadhna's dialogue How Much Pagal from their 1967 film Anita. In the film, this scene comes when Neeraj (played Manoj Kumar) visits Anita (portrayed by Sadhana) at her home and asks her to marry him as they are deeply and madly in love. “Aaj mai itni pagal nahi hun ki tumse shaadi kar lun,” says Anita when Neeraj asks, “Tum pagal nahi ho?” She looks into his eyes and says, “Hoon.” “How much pagal,” he then asks and Anita replies, “Very much pagal.” Neeraj continues, “How much very much pagal?” and the actress tells him, “Very much, very much pagal.” He confirms, “Very much, very much, very much pagal?” She nods and smiles. “You pagal, me pagal,” says Neeraj and Anita adds, “Me pagal, you pagal.” He holds her hand and says, “Pagal, pagal.” Before Anita could reply, her father returns home. Madhuri Dixit and Terence have recreated this dialogue and we must say, their expressions are on point. In the video, the actress looks gorgeous in a peach outfit while Terence is seen wearing all-black attire.  Not just the post but the caption will also leave you in splits. “That 70's Nibba Nibbi! Yes, they existed then too! How pagal were we?” it read.

See the clip of Madhuri Dixit and Terence Lewis from the sets of Jhalak Dikhhla Jaa 10 here:

Terence Lewis recently joined the judge panel of the dance reality show. He has been sharing glimpses of the fun he is having with Madhuri Dixit and host Maniesh Paul every now and then. Here, Terence and Madhuri Dixit are seen vibing and lip-synching to the iconic song Haal Kaisa Hai Janaab Ka. In the caption, he tweaked the lines from the film Silsila and wrote, “Somewhere in a parallel universe…main aur meri Madhuri, aksar baatein karti hain. Tum hoti toh kaisa hota, yeh Silsila kaise hota. Dekha ek khwab. Mai aur meri Madhubala. PS: Maddie's laugh at the end … AaiHai (heart icon).”