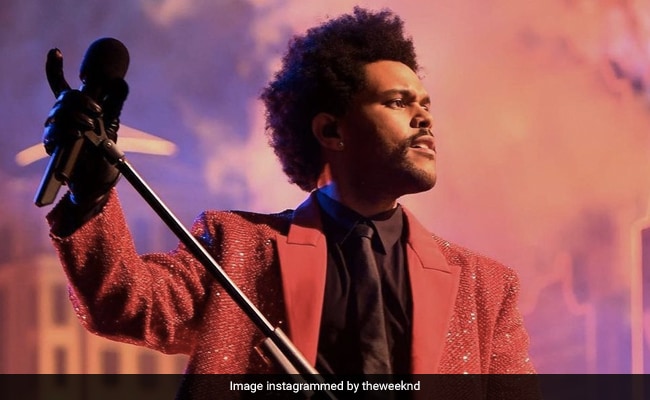 The Weeknd on the Super Bowl stage (courtesy theweeknd)

Canadian R&B sensation The Weeknd rocked the Super Bowl halftime show at Raymond James Stadium in Florida, Tampa on Sunday, and Twitter picked its favourite moments, of course. One of them is when the lit up background split into a pathway, making way for The Weeknd to enter a maze of blinding lights. What happened was, three minutes into the performance, The Weeknd switched to the song The Hills, singing on stage but just as it was about to conclude, he added a quirky twist to his act and walked around in a maze of light with a quizzical expression and a face-tracking camera, before moving on the tunes of Can't Feel My Face.

The Weeknd's expression inside the maze amused Twitter as netizens equated it with real life situations and started a meme fest. From losing one's mom at the super market to looking for a face-mask during the pandemic, The Weeknd's act seemed to sum up all kinds of anxious situations for folks on the Internet. Here's how Twitter reacted to The Weeknd's Super Bowl performance with ROFL memes.

Me running to the bathroom after eating 4 different cheese dips for dinner pic.twitter.com/n6DsNKC7DC

Me looking for attention because my boyfriend is ignoring me for football pic.twitter.com/XYe8qqzzbi

Me looking for my face mask when I'm already late for work #SuperBowlpic.twitter.com/RRWLIc29FT

Me trying to find my wife at Target pic.twitter.com/ejNCEdTV1K

me losing my mom in the supermarket when i was 10#SuperBowl#SuperBowlWeekndpic.twitter.com/4vFMt4rJkw

My friends looking for me in the club after I made a new friend group in the bathroom pic.twitter.com/NL7CMPmGSk

Me looking for the Gatorade color pic.twitter.com/ti9wxA2YCm

Last year's Super Bowl halftime show saw Shakira and Jennifer Lopez headlining a giant dance fest. This year, The Weeknd performed to a socially distanced stadium within the premise of the stage in sync with COVID-19 safety protocols.

The Weeknd made his debut as a Grammy winner in 2015 with two wins. His resume as an artist includes one more Grammy award. However, The Weeknd was noticeably snubbed in the nominations for the 63rd Grammy Awards to be held in March.