Star Wars: The Rise Of Skywalker Movie Review - Daisy Ridley is first-rate as Rey but it is Adam Driver as Kylo Ren who steals the show. 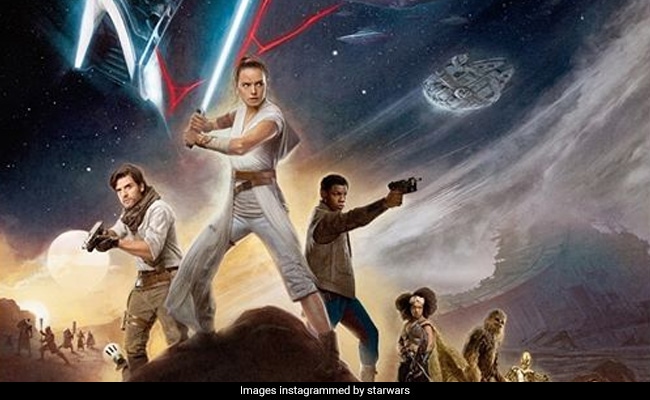 The Rise Of Skywalker Movie Review: A promotional poster of the film. (Image courtesy: StarWars)

The power of nostalgia cannot be overestimated. J.J. Abrams, who directed the first film of the Star Wars sequel trilogy (The Force Awakens, 2015) and returns to steer the franchise to its culmination with Star Wars: The Rise Of Skywalker, is all too aware of that truism, especially in the light of the hostile fan reaction provoked by Star Wars: The Last Jedi (2017), in which director Rian Johnson dared to stray from the beaten path.

Star Wars: The Rise Of Skywalker drifts back into the known orbit, treads cautiously, and falls back on old sleights. As a result, parts of the film, particularly in the last hour or so, may seem like a rehash of 1983's Return of the Jedi. Fans are unlikely to complain. However, sticking largely to established norms and mindful of what the Star Wars heroes, villains and their galactic battles - all of which are larger-than-life and have been pop culture-defining phenomena over a period of 40-plus years - mean to the fans, Abrams is unwaveringly focused on carrying the fans along. In the bargain he skips paying attention to letting The Rise Of Skywalker acquire a life and logic of its own.

The weight of expectations - Star Wars Episode IX is one of the most anticipated films in the annals of Hollywood - is a heavy burden for what is meant to be the swan song of much-loved franchise. Shouldn't it have been better and brighter than any of the previous eight Star Wars episodes? It is anything but.

The film is energetic and entertaining on the face of it, but if you pause to consider the finer aspects of storytelling - plotting, character development, logic and suchlike - you are likely to spot gaping holes in the structure built by Abrams, who has co-written The Rise Of Skywalker with Chris Terrio. He pays homage to the George Lucas universe, throws in a few minor visual Easter eggs and mounts a few grand scenes that look great while they last. Neither a proper expansion nor a summation of what Star Wars stands for, it falls into the cracks between conception and execution.

Following Rey (Daisy Ridley, who is first-rate) and her buddies, Finn (Frank Boyega) and Poe (Oscar Isaac), as they set out to stymie the evil plans of the tyrannical First Order, the film answers a few key questions, most notably one related to the Rey's parentage, kills off a few characters, and surprisingly brings back a few others.

One character who makes a comeback is the principal villain, Emperor Sheev Palpatine (Ian McDiarmid), who, at the end of Return of the Jedi, had been thrown down a chute and had met his end. In The Rise Of Skywalker, his revival is presented as a fait accompli without a proper explanation nor an attempt to make it believable. Palpatine is reintroduced with the express purpose of overriding Snork's surprise death in The Last Jedi. But it is anything but convincing.

Much of The Rise Of Skywalker is devoted to a strategy to negate The Last Jedi, a film that sought to pull away from the George Lucas imagination of a Galaxy Far Far Away. What this necessitates for The Rise Of Skywalker is the act of drawing upon Star Wars lore to restore the links with the franchise's past and then creating its own course towards a finale. All this makes the film so dizzyingly busy that it becomes difficult in the initial hour to grasp every plot detail. This is turn leads to contrivances designed to paper over the gaps - they barely pass muster.

The craftsmanship is of the highest order, the CGI is terrific, and the performances applause-worthy, but there is something about The Rise Of Skywalker that does not let it float free and rise to heights that the franchise hasn't touched before. Its finesse is of the strictly superficial kind, which is a huge disappointment for those who believed that Star Wars would end with a bang. Rey, Finn and Poe generate a fair deal of excitement, but they cannot replicate the magic that Luke Skywalker, Han Solo and Princess Leia worked in the original Star Wars trilogy.

The Rise Of Skywalker is Daisy Ridley's film, but Boyega and Isaac do not have as much to do. It is Adam Driver who steals the show as Kylo Ren, whose telepathic connection with Rey allows him to taunt her about switching allegiance to the dark side.

Palpatine has picked Kylo to be his successor. The evil emperor promises Kylo an entire army and immense power in exchange for the task of eliminating the last Jedi trainee, Rey. On the other side, Rey, having lost her master Luke, is learning the Jedi ropes from General Leia (Carrie Fisher, who appears in awkwardly spliced together scenes left out of the earlier films).

Eventually, Rey decides that she must track down Palpatine and leaves the Resistance base accompanied by Finn, Poe, Chewbacca (Joonas Suotamo) and C-3PO (Anthony Daniels) and BB. They progress towards their goal, rising level by level, as if in a video game.

Only two people can stop Palpatine - Rey and Kylo - but they are on opposing sides. A lightsaber duel on a fallen Death Star and other visually striking passages abound in the film, but they are slapped together in a manner that smacks of a lack of planning, slapdash writing and generic action tics.

The Rise Of Skywalker is a middling affair too intent upon pleasing the fans to rid itself of its stop-go-stop rhythm.