Sherni Review: A still from the film. (courtesy YouTube )

Like the displaced tigress of the title, the human protagonist of Sherni, a just transferred divisional forest officer, finds herself trapped. Not that she isn't up to the task. However, in an alien, dead-end, male-dominated environment, being good at one's job simply isn't enough if you are a woman.

DFO Vidya Vincent, played with impressive restraint by Vidya Balan, has to fight tooth and nail to save the female feline forced out of her natural habitat due to continuing deforestation and dried-up watering holes. Just as important, she is constantly at odds with entrenched patriarchy. 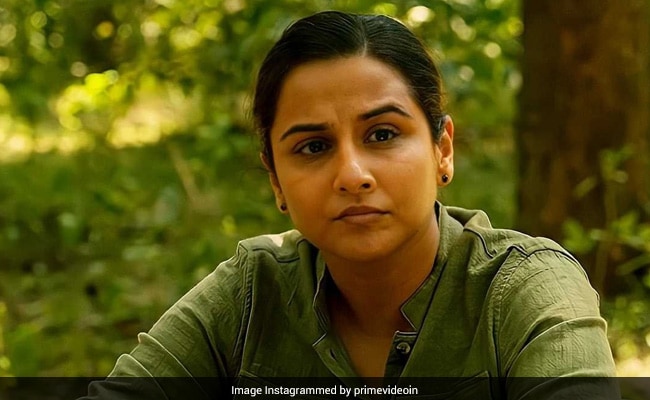 The tigers and bears pose a real threat to a village on the edge of a forest, but the wild animals are less dangerous than the men charged with sustaining the delicate balance between the fragile environment and a myopic development model driven by greed.

Director Amit Masurkar (Sulemani Keeda, Newton), working with a screenplay by Aastha Tiku and dialogues penned by him and Yashasvi Mishra, renders a man-animal conflict drama as an understated, multi-layered, trenchant satire about the politics of gender and environmental conservation. Eschewing excess, Sherni does not growl and roar. It bites.

The supporting actors (Vijay Raaz, Neeraj Kabi, Sharat Saxena, Brijendra Kala, Mukul Chadda) bring to the proceedings a high level of authenticity. They are aided in part by a tertiary cast made up of faces that merge completely with the environs. With all the actors, known or unknown, professional or amateur, looking the parts they play, Sherni does not have to resort to cliched flummery to draw the audience into its beleaguered universe. 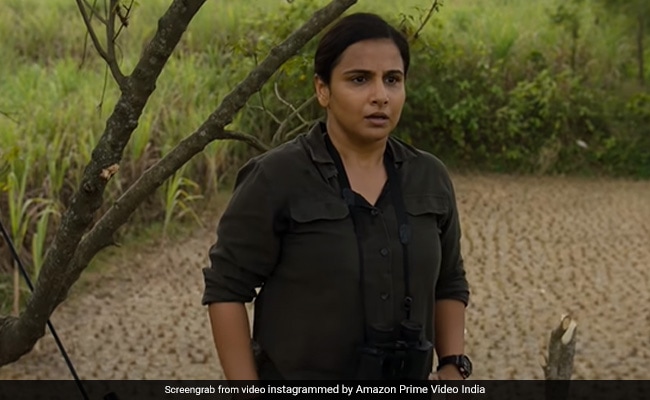 The Amazon Original movie is lit and lensed admirably well by cinematographer Rakesh Haridas. He achieves visual fluidity and depth both in the interior scenes and the wide-angle exterior shots, many of which are staged in the still of the night bathed in darkness.

The tranquility of the forest is frequently shattered by men out to fish in troubled waters. Among them is an odiously pompous hunter (Sharat Saxena) - about the only character in the film who borders on the conventional - a smarmy MLA (Amar Singh Parihar) and a hostile former legislator (Satyakam Anand).

Sherni traverses across a range of social, economic, environmental and political issues with measured steps. Distressed villagers robbed of grazing grounds for their livestock, wild animals cornered and compelled to venture out of the forest, self-serving politicians haranguing each other and making tall promises they have no intention of keeping, and hopelessly compromised officials disinterested in, if not incapable of, stemming the tide.

An irate mob attacks a forest guard and sets a government vehicle ablaze after a villager is killed by a tiger. In another sequence, two groups of political workers clash violently in similar circumstances. These confrontations do not, however, define Sherni in its entirety. The film resists the temptation of staging super-charged run-ins between the forces of conservation and politically connected people who believe in taking the easy way out. It trots out steady driblets of information and makes each layer that it unpeels count.

Sherni plays out in a forest somewhere in central India, not far from where Masurkar's critically lauded Newton was set. Like Newton, Sherni centres on an upright and earnest government official trying to find a foothold on slippery ground. Vidya Vincent faces numerous obstacles as she goes about doing her job. The tigress on the prowl, even as it takes a toll on human lives, isn't, however, her biggest adversary.

If anything, Vidya feels an affinity with the uprooted tigress trying to make its way, along with two cubs, across an unfamiliar terrain to return to the safety of the forest. Decisions that the manipulated forest department makes endangers Vidya's own well-being as well as that of the jungle and the wild animals.

Vidya's boss is Bansilal Bansal (Brijendra Kala), a man who thinks nothing of schmoozing with the local MLA and his cohorts. Elections are up ahead and the tigress becomes a political football between the sitting legislator and the former one, with the forest warden siding with the former against the latter, leading to severe complications on the ground for Vidya Vincent and her team.

Vidya, a middle-class Malayali married to Pawan Shrivastava (Mukul Chadda), has to ward off thoughts of quitting the Indian forest service. Her husband warns her against taking any hasty steps because he himself is in danger of losing his corporate job amid a worsening recession.

Vidya is not as angry as she disillusioned with the system. Her resistance is built on tact and patience rather than on obstinacy and belligerence, which sets her apart from run-of-the-mill Bollywood heroines battling male condescension and corruption.

She receives support from Zoology professor Hassan Noorani (Vijay Raaz, as spot-on as ever), who doubles up as a DNA collector for a resource-starved forest department. Traps are laid in the jungle to track the movement and hopefully capture the 'maneater', but Vidya and Noorani are up against a politician-official nexus.

While Noorani is disparagingly described as 'a butterfly expert', Vidya has to grapple with runaway sexism. The hunter repeatedly reminds her that nobody understands tigers better than he does. Her feckless boss rarely stands up for her. A bar attendant at a departmental party is befuddled when she asks for a whiskey instead of the kaala khatta that he suggest for her. A politician claims he respects women and Vidya is like a didi to her.

But she does not demand any favours from anyone and holds her ground in the face of repeated acts that smack of outright gender prejudice. "Learn to pick your battles," her one-time mentor (Neeraj Kabi) says to her, presuming that she still needs his guidance.

The many strands of Sherni make it the film it is. It touches upon the lopsided nature of development, the rights of forest dwellers, the dangers of a depleting forest cover, and the lust of politicians for power and pelf even as the world around threatens to come unstuck. A song composed by Mayur Narvekar of Bandish Projekt with lyrics by Hussain Haidry (Bandar baant ka khela) has a dig at the blatant skulduggery of those in the saddle and contributes its mite to turning the film into a larger commentary on the times we live in.

You know exactly what Sherni is trying to convey (tangentially but tellingly) when a minister peremptorily tells Vidya Vincent that no "proof" that she gathers will override the "faith" of the people. The truth, he suggests, is immaterial, thereby admitting that we live in an era in which belief trumps evidence and manipulation of facts gets the better of diligent pursuit of probity.

Sherni isn't just a tigress-on-the-loose adventure. It is a film of our times for the ages, a worthy follow-up to Newton.