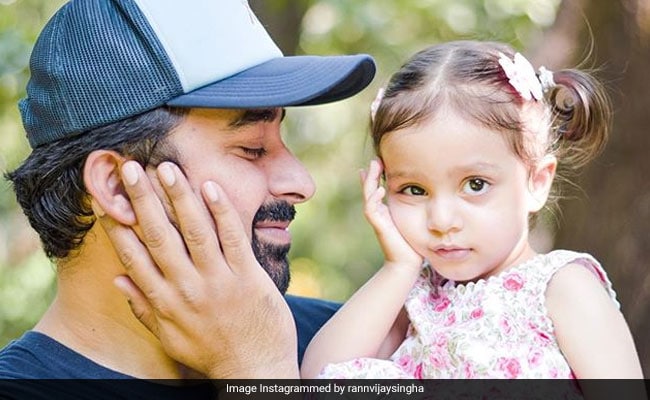 VJ-actor Rannvijay Singha's daughter Kainaat turned two today and to commemorate the day her father posted a heartfelt message for her on Instagram. On Kainaat's birthday, Rannvijay treated his Instafam to an oh-so-adorable picture, in which Rannvijay can be seen replicating his daughter's cute expressions. "Meri jaan Kainaat, happy birthday! Seems like yesterday when I held you in my arms for the first time and just like that you are 2," Rannvijay captioned the picture. The picture has garnered close to two lakh likes in less than six hours. Birthday wishes poured in for the little one in the comments section. Neha Dhupia, who features in television reality show Roadies as one of the gang leaders along with Rannvijay, also commented on the photo. "Awww...Kai is the sweetest and so is Kai's daddy (most of the time)," Neha wrote.

Meri jaan @singhakainaat happy birthday! Seems like yesterday when I held you in my arms for the first time and just like that you are 2! #satnamwahegur

Rannvijay Singha married Prianka Vohra on April 2014 and they welcomed Kainaat in January 2017. Rannvijay is a doting father and he is often seen documenting his love for Kainaat on social media. In a picture shared a few months ago, Kainaat can be seen curled up in Rannvijay's arms. Rannvijay accompanied the picture with a beautiful caption which read: "Don't worry about falling Kainaat. What's important is to get up every time you fall. For the time being I'm around, and till Dada is around he'll always catch you."

Don't worry about falling @singhakainaat ,what's important is to get up every time you fall. For the time being I'm around, and till Dada is around he'll always catch you. #satnamwaheguru

Last year, Kainaat trended big time after pictures from her play date with Taimur surfaced on social media. We got a glimpse of Taimur and Kainaat's play date in London, through Ranvijay Singha's wife Prianka Vohra's Instagram stories. In the video that went viral, the duo were seen playing on a see-saw.

On the work front, Rannvijay Singha is currently shooting for the 16th season of Roadies. Rannvijay made his Bollywood debut in 2009 with Toss: A Flip of Destiny. He has featured in several Bollywood films like London Dreams, Action Replayy and 3 AM.