Ramprasad Ki Tehrvi Review: Director Seema Pahwa's actors etch out characters that are so real and tangible that it is easy to be drawn even by their palpable flaws. The biggest triumph is how the film gives every actor his or her moment in the sun. 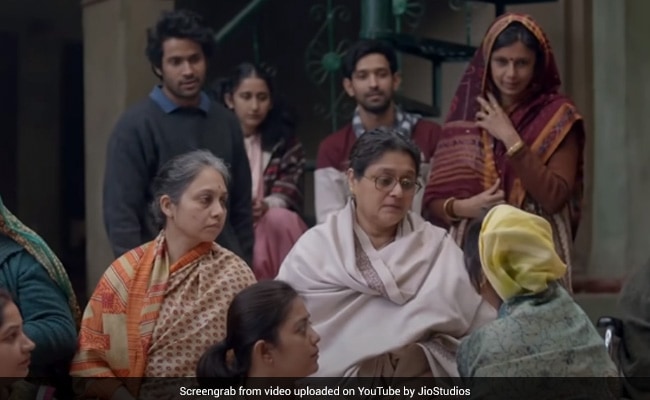 Ramprasad Ki Tehrvi: A still from the film. (courtesy YouTube)

Caustic humour courses all through Ramprasad Ki Tehrvi, actor Seema Pahwa's directorial debut, but it never overwhelms the tonal subtleties of the sensitive, delectable slice-of-life family drama. The screenplay (written by the director herself) is marked by an astute orchestration of emotions. It, however, adopts strikingly unsentimental means to portray members of a large family confronting bitter truths about the frayed bonds that they have hitherto played down, if not completely ignored.

The death of a patriarch (Naseeruddin Shah) brings the brood together in their ancestral home in Lucknow - and, in the 13 days that they have to wait out for the religious ceremony in honour of the departed soul - tears them apart. This could be the story of any Indian family where 'democracy' isn't traditionally encouraged. Roles here are clearly demarcated and enforced.

Parents are meant to be revered. Other family elders can get away with their shenanigans. Sons and daughters have to perform their filial duties come what may. Daughters-in-law have to fall in line quickly in order to fit in. But when individuals are swayed by self-interest and demand their pound of flesh, which is inevitable in any relationship, who decides where to draw the line? Ramprasad Ki Tehrvi examines that question with intent - and impressive acuity.

Seema Pahwa - who isn't part of the cast but would definitely have added value had she taken an onscreen role too - has outstanding allies in an array of accomplished actors. They etch out characters that are so real and tangible that it is easy to be drawn even by their palpable flaws. The mourners are related by blood but now share nothing else at all. The offspring of the departed man are especially disgruntled with the parents who have been left to fend for themselves over the last many years.

Half a dozen siblings - two sisters and four brothers - and their spouses and children congregate to be by the side of their recently widowed mother Savitri (Supriya Pathak Kapur). She admits that she had always wanted all her children to live under one roof but now that all of them are here, she has begun to feel lonelier than she has ever been. Which of her children will she choose to spend the rest of her life with? It becomes obvious to her, as it does to us, that nobody is queuing up to take her home.

Three is a crowd but four - the runt of the litter, Nishant (Parambrata Chatterjee, who also assumes the younger avatar of the departed father), is the last to arrive because he lives in Mumbai and his flight is delayed - is a veritable melee. Add to that a pair of sisters (Anubha Fatehpuria and Sarika Singh) and you have a household teeming with more people than it can hold despite being anything but cramped in the physical sense of the word.

They squabble and fulminate endlessly. They are constantly at odds with each other. Early signs that all isn't well are provided by one of the sons-in-law (Brijendra Kala) haggling animatedly over the price of the hardwood needed for the cremation of Ramprasad Bhargava, a music teacher who swore by the importance of getting the sur of life right.

His children obviously haven't heeded the message - the lack of harmony plays out in unseemly ways as they wallow in self-pity and bicker over trivial matters, including over who gets the first use of the toilet in the morning in the front yard of the house. A maternal uncle (Vineet Kumar) usually bamboozles his way through to the consternation of the other members of the brood.

It all a downward slide as the three older sons (Manoj Pahwa, Ninad Kamat and Vinay Pathak) whine over the neglect they feel they have suffered at the hands of their parents. As they sit around drinking, their still-raw inner wounds act up and take the form of ugly recriminations. Matters are aggravated no end when they discover that their dear departed daddy has left them under a mountain of debt.

Their wives (Deepika Amin, Divya Jagdale and Sadiya Siddiqui) form a self-serving triumvirate. They want to ensure that their husbands do not part with more than they should. Also in the line of their fire is Nishant's childless actress-wife Seema (Konkona Sensharma) in her place. The last-named is, of course, the odd one out, an object of detestation. The other daughters-in-law are bent on using the pretence of conformity; Seema believes in hiding nothing, and that includes her soft corner for her husband's nephew (Vikrant Massey).

The writing and the acting are fabulous. But no less impressive are the camerawork (Sudip Sengupta) and the editing (Dipika Kalra). The elegiac mood of the story is enhanced by the unhurried rhythm that film acquires owing to the way it is cut. Many shots dissolve into a black screen and the film flits rather than flows, articulating the uncertainty that the family is enveloped in.

Ramprasad Ki Tehrvi opens with a fluid shot that glides gently into the house of Ramprasad Bhargava on the night of his demise. The camera makes its way through a narrow lane, a courtyard, and an indoor passage before turning into a room where the old man lies in his bed and listens to a boy from the neighbourhood playing the piano. Dimly lit rooms abound in the film and most of the key conversations take place either in closed interiors or in crowded courtyards and corners.

The biggest triumph of Ramprasad Ki Tehrvi lies in the manner in which it fleshes out a huge number of characters and gives every actor his or her moment in the sun. It would be unfair to single out any one of them because it is the level of unwavering unison that they attain as a team that makes the film a stunning achievement. Wit, warmth and wisdom coalesce beautifully in this genteel yet incisive film about a dysfunctional and unfailingly relatable family.