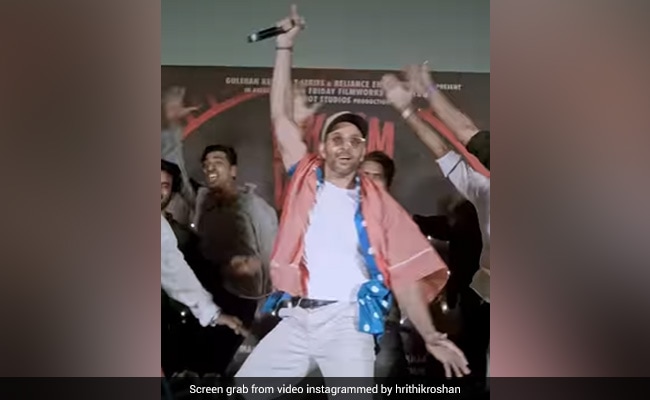 Hrithik Roshan, who is waiting for the release of his 25th film Vikram Vedha, co-starring Saif Ali Khan is way too excited about it. The actor, on Wednesday, shared a video on his Instagram handle. In the video, the actor can be seen attending the launch event of his song Alcoholia with a huge crowd, who can be seen dancing to it. Hrithik Roshan too is seen dancing on the stage. The video also features Hrithik's Vikram Vedha co-star Rohit Saraf, who is also seen dancing with the crowd.

Hrithik's post soon was flooded with many comments. His mother Pinkie Roshan too commented on his post. She wrote, "I love it" with red heart emojis.

Many of Hrithik's fans dropped fire and heart emojis in the post's comments section.

Hrithik, lately, has been sharing many pictures and videos from his film's promotions.

A few days ago, the actor shared a tricky post on Instagram, whose caption read, "Hmm, which one do you like better? The white? Or the blue/black?" Hrithik had shared a picture of two cars with the colours mentioned in his caption, but when paid attention, one can notice that the actor is talking about his film's posters.

Take a look at a few more posts by Hrithik:

Vikram Vedha, directed by the filmmaker duo - Gayathri and Pushkar - is all set to release globally on September 30. The film is the official Hindi remake of the 2017 Tamil film with the same name and directors.

Other than Vikram Vedha, Hrithik will also be seen in Fighter, also starring Deepika Padukone in the lead role.

Nothing, Just A Pic Of New Mom Alia Bhatt With Sister Shaheen