Pagalpanti Movie Review: Even Anil Kapoor, Arshad Warsi Are Left High And Dry In This Attempt At Comedy

Pagalpanti Movie Review: John Abraham and Pulkit Samrat turn on the charm but only superficially. 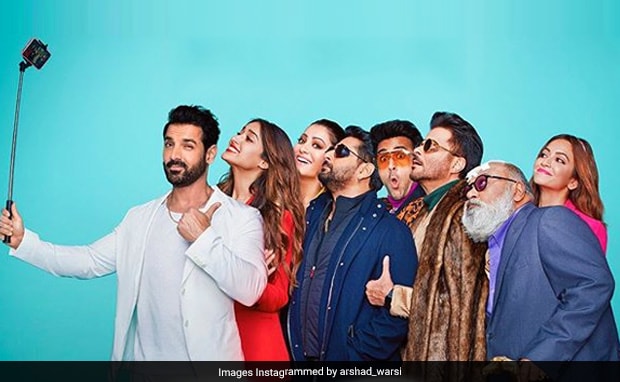 A madcap caper without a semblance of a cap on its obsession with inanity, Anees Bazmee's Pagalpanti comes up with a mixed bag of stale gags and unleashes unbridled buffoonery in an attempt to pass it all off as comedy. The sheer mindlessness that the pea-brained film mines in the hope of tickling your funny bone is more grating than uproarious. The jokes are silly, the humour is lame and the acting wildly erratic. The net result is an attempted laugh riot that runs riot at regular intervals. The laughs never materialize.

The plot, peppered with chases, explosions and musical interludes forcibly bunged in when nothing else seems to be working, hinges on a bunch of bumbling fools who go around in circles, taking the film with them. Raj Kishore (John Abraham), Junky (Arshad Warsi) and Chandu (Pulkit Samrat) launch a business. It goes up in smoke. Literally. Raj is blamed for bringing bad luck to the venture.

Enter two gangsters, Raja (Saurabh Shukla) and his brother-in-law Wifi Bhai (Anil Kapoor). They hire the three down-in-the-dumps men for their nefarious activities. A lot of money and effort has gone down the drain and the criminal enterprise is aimed at making good the losses. While the characters encounter ups and downs as they flail about aimlessly, it is a one-way street for the film. It hits a point of no return pretty quickly and no amount of horseplay can lift Pagalpanti out of the morass.

There is no Akshay Kumar in the cast but Pagalpanti takes a leaf out of the star's playbook and deviates into a laboured "public service" track obviously designed to curry favour with the present political dispensation. The film throws in a character named Niraj Modi (Inaamulhaq), a tycoon who has fled India leaving behind a trail of uncleared loans a la Nirav Modi.

That provides the pretext for a climactic catch-all tirade by one of the key characters against economic offenders who have given the authorities the slip. Pretty convenient that - not a word is uttered against the powers and the systems that allow such brazen skulduggery by the rich and well-connected. Anyways, come to think of it, even if the film had gone there, it would have tied itself up in some more ungainly knots.

Anyways, we are getting ahead of the story here. Story, did we say? Well, Pagalpanti pretends that it has a story to tell. But all it can manage to rustle up is a series of silly escapades made worse by three 'leading' ladies who are led up the garden path by a script that accords them little space beyond looking pretty and swaying to songs that are meant to be showstoppers. Yes, they do stop the show and put us off completely.

Sanjana (Ileana D'Cruz) is wooed by John Abraham's character and Jahnvi (Kriti Kharbanda) forms a pair with Pulkit Samrat's boyish Chandu. Urvashi Rautela pops up out of the blue towards the end of the film and disappears just as quickly. But that is the lot of all three girls in this right royal mess that comes pretty close to putting Housefull 4 in the shade.

Arshad Warsi, as good a comedian as any in Hindi cinema today, delivers his witty one-liners without breaking a sweat. However, there is very little in Pagalpanti that the actor hasn't done before and with greater impact. The same is true of Saurabh Shukla, another screen performer known for effortlessly rises above bad scripts. Even for him, this one is a hard nut. In the guise of the smarmy Raja, he isn't for once the king of all he surveys.

The only one in this unseemly rubble of a film who does not appear to care a fig about the ruins around him is Anil Kapoor, who, playing a garrulous, nattily attired gangster who speaks before he thinks, gets to do some of the passable bits. But so few and far between are these moments that they do not add up to much.

John Abraham and Pulkit Samrat turn on the charm but only superficially. The former laces it with his customary broad-shouldered swag, the latter relies on the fresh-faced fecklessness that he specializes in. But neither actor is able to inject enough madness into the proceedings to do justice to their presence in the cast.

If there is anything at all in Pagalpanti that could be given a thumbs up, it is the fact that the makers of the film make no bones about their shin-level ambition. They think being utterly absurd makes sense. But does sinking so much money into something so maddeningly frivolous a good idea? Certainly not if the lunacy on show isn't of the inspired variety.

Pagalpanti does deliver something akin to the madhouse that it promises but its loony-bin approach to hilarity is too dated to be effective.