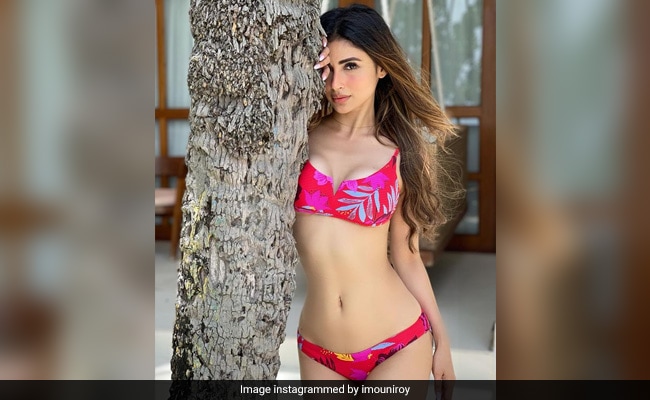 Mouni Roy is making Maldives look so good. The actress, on Tuesday morning, shared picture-perfect shots from the beach destination in her Instagram profile. In the pictures, Mouni Roy be seen dressed in a printed bikini as she poses next to a tree. In a separate shot, she posed with some foliage and looked every bit stunning. Sharing those pictures from Maldives, Mouni wrote: "Remnants of a hot summer day." Just like us, her Instafam too loved the picture and flooded the comments section with fire and heart emojis. We are not surprised at all TBH. However, a few hours later, the actress decided to delete the post from her Instagram profile. The picture, which went viral on social media, was shared by several fan pages dedicated to her.

"The belle of the island vibes," Mouni Roy aptly captioned the post. Check it out:

Mouni Roy shared a picture with her team and thanked them in her caption. "We do all things with great love, and do wonderful work together... always happy around em! #Team #grateful #thankful #blessed."

Mouni Roy, a popular face in the Indian television industry, has been a part of shows such as Kasturi, Devon Ke Dev...Mahadev and Naagin. She has also participated in reality shows like Nach Baliye 6, Jhalak Dikhhla Jaa 7 and Zara Nachke Dikha.

The actress stepped into Bollywood with the 2018 sports drama Gold, starring Akshay Kumar. She has featured in films like Made In China, in which she co-starred with Rajkummar Rao, and Romeo Akbar Walter with John Abraham. She was last seen in Zee5's London Confidential. The actress will next feature in Ayan Mukerji's Brahmastra, in which she will share screen space with Amitabh Bachchan, Ranbir Kapoor and Alia Bhatt.