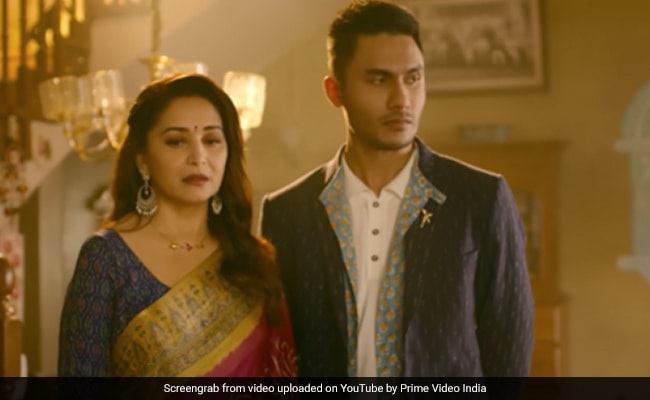 A multi-tasking middle class matron runs into unforeseen hurdles when her only son decides to marry a Punjabi girl from NYC and the would-be-bride's hoity-toity, ultra-conservative parents land up in Gujarat to size up the boy's unassuming family.

Maja Ma, helmed by Anand Tiwari, dives into the resultant kerfuffle but fails to go deep enough to be able to produce a genuinely vibrant portrait of a clash of cultures. The well-intentioned but superficial film promises much more than it delivers. It barely keeps up with the complex issues at play as the simple-minded, spirited protagonist tackles her tribulations.

Madhuri Dixit, who plays the pivotal role of a wife and mother who thinks nothing of letting the well-being of her family always take precedence over her own, is let down by a middling script that has the feel of a radical departure from regular family drama norms to begin with but finally settles for a safe, convenient course on its choppy way to an outright copout of a climax.

As a consequence, an unpredictable twist or two apart, Maja Ma delivers no big, memorable thematic takeaways. It ties itself up in knots as it tracks the actions of an initially defensive but eventually defiant woman forced to rethink her personal priorities all of three decades into a marriage bereft of any spark.

Amazon Prime Video's first Indian original movie, Maja Ma centres on Pallavi Patel, her docile husband Manohar (Gajraj Rao) and her two grown-up children, who take divergent stands on a long-buried truth that threatens to tear the family apart. The woman faces a severe test as her past impinges on her well-ordered life. As the crisis intensifies, her husband and her son are found wanting.

Pallavi's son Tejas (Ritwik Bhowmik) develops cold feet when push comes to shove. Her husband does no better. The homemaker's feisty daughter Tara (Srishti Shrivastava), a heterosexual social worker in a long distance marriage who fights for the rights of the LGBTQIA+ community, stands by her.

Maja Ma deals with sensitive themes pertaining to family, sexuality and personal choice but opts for easy ways out when it is confronted with thorny tangles. It goes all wishy-washy when the time comes to throw caution to the wind and celebrate the rebellion that it showcases but is too scared to go the whole hog with.

Sumit Batheja's screenplay errs in looking for sanitised ways to address complications arising out of marital misunderstandings and the ramifications of suppressing one's sexual orientation. The film's provocations are strictly skin-deep. Intent on providing inoffensive entertainment, it religiously refrains from ruffle feathers.

The social divide around which Maja Ma is constructed is highlighted by the obnoxiously haughty Hansrajs of Manhattan. Bob (Rajit Kapur), Pam (Sheeba Chadha) and their daughter Esha (Barkha Singh) arrive in Gujarat and, with their exceedingly standoffish-bordering-on-oafish behaviour, send the poor old Patels scurrying for cover.

The NRI girl is mercifully unlike her parents. She is so deeply in love that she is willing to go to any lengths to ensure that the marriage isn't scuttled. She does not shy away from letting her boyfriend take a polygraph test devised by her dad to ascertain that he has no vices.

The polygraph test returns to haunt the Patel family when a secretly shot video goes viral and puts in jeopardy the engagement ceremony for which the Hansraj couple has flown down from New York. Bob acts tough. Pam follows suit. The Patels are painted into a corner. Esha and Tejas figure that the only way to ward off trouble is to stick together and battle on regardless.

Two other important characters - another married couple with old links with the Patels - float into the picture quite early in the film. Moolchand Adhia (Ninad Kamat) is Manohar's long-time friend. Kanchan (Simone Singh) is his pretty wife. Both are key to how the story unfolds, the latter markedly more than the former.

The problem with Maja Ma is that its radical pretentions do not hold much water. The people on the screen are way too flat and the problems that they contend with rather unengaging. With the exception of the character essayed by Madhuri Dixit, the men and women we see in Maja Ma are lazily conceived caricatures, nobody more so than Bob and Pam Hansraj with their smug mannerisms and overdone Yankee accent.

Bob is a terrible bloke, Pam is as mean as a viper and Manohar is a harmless, complacent clod who plods his way through a 30-year-old marriage until a shock revelation knocks him out of his stupor and makes him resort to desperate measures. Hemmed in by the parents who are hell bent on muddying the waters, the young lovers hold on to fast dwindling hope. These are strokes as broad as strokes can get.

Madhuri Dixit straddles the wide emotional spectrum of her role with the expected efficacy despite the fact that there are moments in the film when the thoughts that she is called upon to verbalise do not sound particularly convincing.

Gajraj Rao is similarly trapped in laboured situations. He is competent but not as wonderfully in tune with the needs of the role as he usually is. He isn't the only one who is short-changed by the banality of the broth.

The script does no justice at all to Sheeba Chadha and Rajit Kapur, both actors of oft-proven mettle. Playing garrulous and galling NRIs, the duo is ill at ease for no fault of their own. Ritwik Bhowmik (who was also the lead actor of Anand Tiwari's web show Bandish Bandits) is more than adequate but could have used a little more support from the screenplay.

One member of the supporting cast who deserves a special mention is Simone Singh, cast as the coquette whose life, as it transpires, is beset also by a slew of troubles. She is especially in her elements in a cable car confrontation scene that pits her against the expressive Sheeba Chadha towards the end of the film and triggers a significant turning point.

Unfortunately, Maja Ma does not have too many scenes to remember notwithstanding Madhuri Dixit's magnetic presence. It is film that is akin to an undercooked dish whose ingredients and spices go their separate ways and do not seep into each other.