Kangana Ranaut On Karan Johar And Hrithik Roshan: "They Will Never Be Where I Am"

Kangana Ranaut was speaking at the India Today Conclave 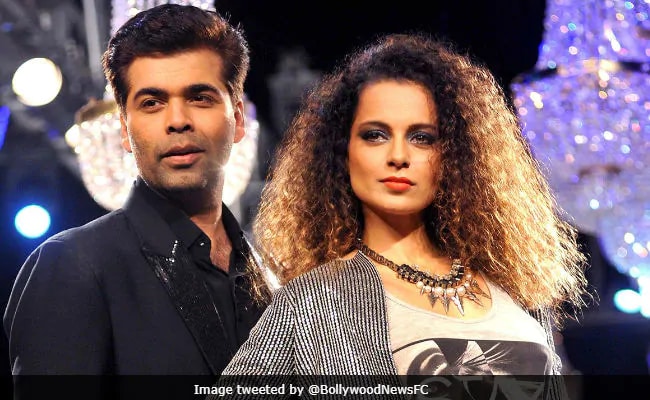 A file photo of Karan Johar and Kangana Ranaut at an event in Mumbai. (Image courtesy: BollywoodNewsFC)

Actress Kangana Ranaut speaking at the India Today Conclave in New Delhi took on filmmaker Karan Johar and actor Hrithik Roshan, saying that "they will never be where I am." The Manikarnika: Queen Of Jhansi actress was asked about the omission of her name in the list of Best Actresses on Karan Johar's talk show Koffee With Karan, to which she said she did not feel "left out." She was quoted as saying: "I really feel I stand out. When you talk about actresses, here's a three-time National Award-winning actress. The Mr Johars of the world try to present a list of people whose acting abilities are questionable. It's brain-feeding of another magnitude."

Kangana, who labelled Karan Johar as the "flag bearer of Nepotism" on his own show in 2017, also said: "Karan mocked me on the IIFA stage and said that I am jobless and I am looking for jobs from him or something like that. I mean, look at my talent and look at your movies. I mean, really? He really called me jobless on some platform? I think some people need a dose of chyavanprash."

Apart from Karan Johar, Kangana was asked about Hrithik Roshan and her public feud with the actor, with whom she has co-starred in Kites and Krrish. Speaking about Hrithik's statement, in which the actor said he didn't know Kangana on a personal level, the Queen actress said at the conclave: "Talking about this so-called case which never actually happened, here's a person I have worked with in two films. He is completely denying even knowing me and getting away with it. How does that even happen?" she asked. "You're saying that you don't know the person at all but you have worked with the same person for five years. One film took two years to make and the other took three years. How come you don't know the person? This is absurd," she added.

Kangana Ranaut is currently filming Mental Hai Kya with Rajkummar Rao and she has also signed up for Ashwini Iyer Tiwari's Panga.