Joji Review: The sinewy structure bestows on Dileesh Pothan's Malayalam film a degree of finesse that enhances its exploration of the banality of greed and self-serving violence. 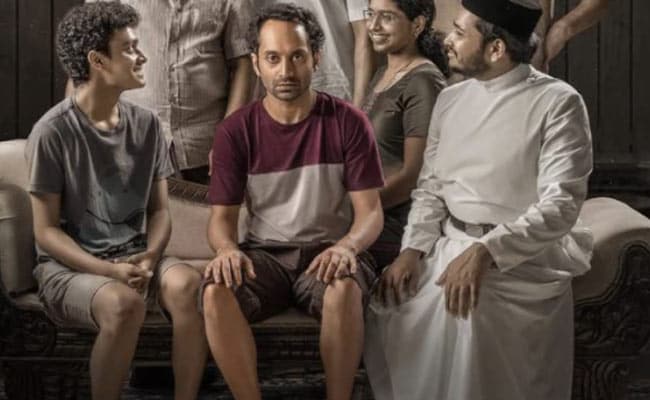 Joji Review: Fahadh Faasil and others on a poster

Shakespeare is rarely as starkly bare-bones as it is in Joji, which reworks Macbeth in an admirably original no-frills style. The sinewy structure bestows on Dileesh Pothan's Malayalam film, streaming on Amazon Prime, a degree of finesse that enhances its exploration of the banality of greed and self-serving violence. In a magnificently tempered lead act, Fahadh Faasil augments the heft of the storytelling.

In his third collaboration with Faasil (after Maheshinte Prathikaaram and Thondimuthalum Driksakshiyum), Pothan crafts a low-intensity drama about the wages of unabashed covetousness. Three sons of a wealthy plantation owner are in a tearing hurry to inherit their respective share of the property. The fallout of their errant thoughts and deeds isn't instant, but when it does hit home it takes an inevitably heavy toll.

The examination of human frailty in Joji is anything but Shakespearean in the conventional sense. The scale and scope of the original play are deliberately whittled down and coiled within the confines of the psyche of one man who is convinced that he deserves better. He takes matters into his hands unmindful of considerations of morality or filial fealty.

Criminal intent and its repercussions play out in the home of a patriarch whose demise triggers fissures that quickly gnaw into the vitals of the family. The taut screenplay favours the granular over the grand, the precise over the spectacular. Stealth, subterfuge and stowed-away secrets overrun the household. The result is deceit, conspiracy, murder and a brood torn asunder.

The writing by Syam Pushkaran (who also scripted Pothan's 2016 directorial debut, Maheshinte Prathikaaram) mines the dramatic bandwidth of the material to perfection - it yields an austere probe into the crooked mind of a wily wastrel who is driven by vaulting personal ambition to resort to destructive acts.

Joji revolves around Faasil. He is the eponymous anti-hero who, as he admits in a scene to his near-comatose father, has failed to be the son that he should have been. The performance dazzles with its effortlessness and efficiency. The portrait that Faasil, markedly leaner than usual, conjures up presents fascinating behavioural asymmetries. It combines the couldn't-care-less air of a man who has nothing to lose with the ingrained self-preservation instincts of a loose-limbed layabout responding impulsively to a constantly ticking mind.

The character of Joji - his domineering father sees him as a total loser and cuts him no slack no matter what - is an epitome of desperation who will go to any length to wrest what he believes he is being unfairly deprived of. He is a college dropout. He does not have much time to put his life back on track. He has it all under control until his elder siblings, no less avaricious than him, begin to suspect that something is amiss.

Joji isn't obviously the only one in the family whose intentions aren't; above board. He lives in a bungalow on a sprawling plantation with his septuagenarian father Kuttappan (P.N. Sunny), two elder brothers Jamon (Baburaj) and Jaison (Joji Mundakayam), sister-in-law Bincy (Unnimaya Prasad) and nephew Popy (Alex Alister).

It is a home that is literally in the woods. It is surrounded by an inquisitive community, represented in the main by a young, opinionated priest, that increasingly encroaches upon the goings-on in this family as things turn more and more messy. The only woman in the household - Bincy - is, more often than not, in the kitchen. She's a seemingly unsullied figure who goes about the business of keeping the home and hearth together. But is she?

The first indications that this is anything but a happy family are provided by Joji's nephew. He, too, has something to hide. At the first available opportunity, Joji, way too crafty, puts the boy in a spot. The youngster is now putty in his uncle's hands.

Everyone out here dons a mask, literally and figuratively. The story during the Covid-19 pandemic. A situation that the real world has been facing for more than a year now is given a portentous ring in a tale where concealment is an essential part of the games, big and small, that the characters play.

The head of the family - when we first see him, he is exercising on strength training rings while the grandson who has something up his sleeves tries to evade his attention as a delivery boy arrives at the gates with a packet whose content is, like much else in this house, is shrouded in mystery - trusts nobody. Nobody trusts him either. The sons are waiting for him to die and he himself is acutely aware of that.

In one scene, the father shouts from the balcony: Who's there? Joji, out in the compound, replies: One of the subjects of your kingdom. His words drip sarcasm. Joji has had enough of the humiliating state of servitude. He has the smallest bedroom in the house, generally eats on a slab in the kitchen and is content to potter around aimlessly in the hope of striking it rich one day.

Elder son Jamon, divorced and temperamental - is alcoholic. Jaison is more straightlaced but is equally eager to lay his hands on his inheritance. But even after their father suffers a severe stroke, ends up on a wheelchair and is barely able to speak, the sons are unable to break the old, ailing man's resolve not to loosen his grip on his money. Joji steps in with his nefarious methods.

He does not have a Lady Macbeth by his side. Sis-in-law Bincy assumes the role of an accomplice. The plot that they hatch is only partly by design - it is entirely Joji's brainwave. Bincy stumbles upon it. She sees value in playing along with Joji's plan.

Director of photography Shyju Khalid's fluid camerawork frames the action in way that is both distant and intimate. When the camera forays into the Joji's personal spaces, it becomes one with the man's inner world; at all other times, it is more an objective, if somewhat alarmed, observer. Editor Kiran Das lends the narrative an edgy rhythm that boosts the tension inherent in the tale of a man's descent into indiscretions that tear his life apart.

Joji, consistently riveting, is as accomplished a Shakespeare spinoff as any ever attempted in India. What stands out above all else in this remarkably composed and superbly acted drama is the stamp of a director on the top of his game.